Recall, at the time of LeBron James‘ return, the Cavaliers‘ first home pregame hype video connected the initial “dream team” from “all walks of life” with glimpses of high school mixtapes to circle back to the kid from Akron. Looking back from the now successful quest of assembling a diverse, championship-caliber roster, Cleveland gave up a lot to get here. Relinquishing young talents for Love of veterans and signing multiple past teammates of James was just the beginning.

There were plenty of sacrifices, but whomever Griffin and company didn’t release, they invested in. Look no further than Kyrie Irving, the star unleashing before us and already drawing Kobe parallels. Actually, look just three picks further in the 2011 NBA Draft to find another example in Tristan Thompson.

Every Cavalier hero lived happily ever after following the city’s quench of a championship. In his epic epilogue, Thompson crossed the border to celebrate an annual fundraiser at home with the crew, family, and his newest friend Larry O’Brien.

I get a ring and I bring it home like I'm Cory Joe @cntower pic.twitter.com/K5AOlZ9Pfx

Philanthropic and friendly as always, Thompson is likely enjoying a well-deserved homecoming. Thompson averaged 6.7 points, 9.0 rebounds under 30 minutes a playoff game this season, including a monstrously clutch (if such a thing exists) Game Six performance in the NBA Finals. He embraced every moment, as he has for the entirety of his Cavalier career. 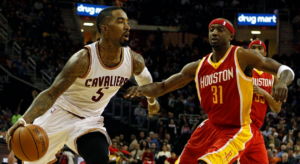