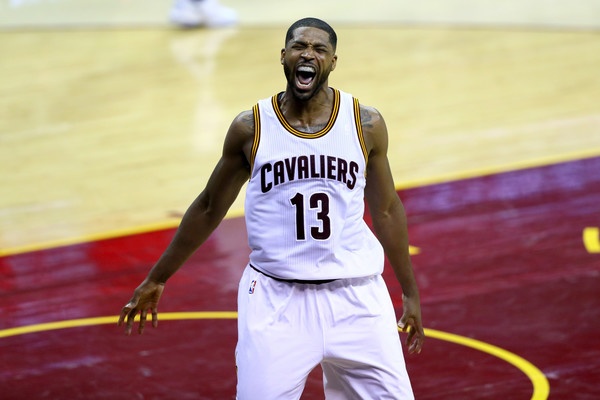 Over the course of his five year career, Cleveland Cavaliers center Tristan Thompson has been nothing short of an iron man, as his current streak of 428 consecutive games played indicates- a streak of games that has taken four years to amass.

When you consider the traveling, injuries, and flat-out time that NBA players put into their respective careers, Thompson’s record truly is impressive. So far this season, he is the only member of the Cavaliers to play in all 58 of their games.

With all of that being said, it seems Thompson and Cavs Head Coach Tyronn Lue are at odds over his current health status. Coach Lue says Thompson has been playing hurt at times this year while Thompson insists that he is fine.

Let’s dive a little bit deeper into this quandary, shall we?

Last night, after Cleveland’s 102-95 home win over the Milwaukee Bucks, Coach Lue was asked about Thompson’s role in their fourth quarter 11-0 run — a sequence that basically sealed a victory for the Cavs.

At the time, the Cavs were leading the Bucks by six points. Then, with 3:48 showing on the game clock, Thompson blocked Malcolm Brogdan’s lay-up attempt, snatched the subsequent rebound, and quickly dished the ball up the floor for a Kyrie Irving three-pointer.

Just under a minute later, LeBron James took a shot from beyond the arc. James’ shot missed, but Thompson, known for his scrappy offensive rebounding abilities, kept the play alive by snatching the board. Derrick Williams then drained a three-pointer to push the Cavs ahead even further.

After the game, Lue spoke to the media where he dropped a nugget about Thompson’s health. Via Joe Vardon of Cleveland.com:

“Tristan’s been great for us defensively really as of late, starting to get healthy,” Coach Lue said of Thompson after last night’s win. “He’s been in the right spot when guys are getting beat back door, or getting beat off the dribble. He’s doing a great job being in a help position and ready to block those shots. He’s gotten better and better at that.”

If you read Coach Lue’s quote with a keen eye, you will have noticed that he said Thompson is “starting to get healthy”.

“Yeah. He’s been going through some tendinitis all year, his knee has been bothering him a little bit all year,” Lue continued. “He’s finally starting to come around and he’s feeling good.”

This is where the conflicting status reports begin. So, what does Thompson, a player who has started in every game this season, have to say about his condition?

“No, no tendinitis, I’m fine,” Thompson said. “I’m good. Not sure what coach Lue’s talking about. Nothing more than the usual bumps and bruises. I’m good.”

When the dust settled inside Quicken Loans Arena on Monday night, Thompson had recorded eight points, eight rebounds, and one block. On the season, his 9.7 rebounds and 1.2 blocks per game are career high numbers. Furthermore, his 3.7 offensive boards per game is good for the fourth-most in the NBA. And let’s not forget about the aforementioned games played streak — the longest of its kind in Cavaliers history.

Whatever status he is in, Thompson has certainly been performing at a high level for some time now. Maybe Coach Lue and Thompson can get together for a discussion about the true nature of this alleged medical issue.