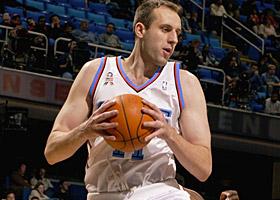 5. Potential Depth Issues Due to Fatigue or Injury

The NBA season is actually quite long, at 82 games. For the Cavs, assuming they are able to improve as a unit and come back from their 1-3 record, this means that some players will get rest later-on in the season. It is very possible that Coach Blatt will sit some players toward the end of the season, when/if the playoff seeding is already decided. In addition, it is very possible that we could see Blatt sit out LeBron, Kyrie, or KLove on the second night of back to back games to get them some extra rest. Injuries are also inevitable, meaning that the bench players will be relied on to step up and perform when their number is called. The combination of fatigue and injury exposes potential depth issues that the Cavs have, since there is a sudden drop-off between the starting five and their backups. Blatt also lacks trust in his bench players, as he only brought 3 players off the bench in the Cav’s 102-100 loss to the Utah Jazz. Instead of giving the sitting Dellavedova’s playing time to another player off the bench, he gave extra minutes to all the starters, which definitely made them more tired than usual. In order for the Cavs to succeed this year, the players will have to earn Blatt’s trust and show him that they can step up and contribute. This will come in handy especially when the Cavs are in need of fresh legs later-on in the season.

4. Roadtrips Early-on in the Season

Four games into the ‘14-’15 season, the Cavs are already on a 4 game road-trip, which is typically a mid-season kind of trip. The Cavs will play the final game of the trip against the Denver Nuggets on Friday, and this follows a win against the Bulls and losses against the TrailBlazers and Jazz.
The Cavs are still getting used to playing with each other in Blatt’s Princeton style offense, and being on the road is sometimes very difficult, especially when spending a week travelling from city to city. Jet lag and fatigue play factors in the players performance, which ultimately impacts games. The only benefit is that the Cavs will play 9 of their next 12 games at home, which will give them time to rest and train at home. The Cavs will have a 4-game east coast road-trip in February, in addition to a 5-game west coast road-trip in January. Hopefully with a month or so being consistently at home will provide better results for the upcoming road-trips than the current one.

In the 2014-2015 NBA Regular Season, the Cavaliers will play the second-most national televised games of all NBA teams. These 30 games will bring extra attention and scrutiny toward the Cavs and their performance. This will bring added pressure to the Cavs, especially when they are on the road. Nationally televised away games are arguably the most challenging games to win, as the away team is not in the comfort of its home court. For LeBron though, he has statistically stepped up to the plate, putting my bigger, better numbers when playing away from home. It will be seen as to whether he continues this trend, and if the Cavs can follow suit.

2. Attention Toward the Big Three and Overall Team Chemistry

With the formation of a Big 3 in Cleveland, there is a lot of pressure to perform immediately. There is additional pressure at the moment, because the Cavs have started the season 1-2, with their lone win coming against the Chicago Bulls in overtime. The Big 3 is heavily relied on to provide scoring, defense, and leadership for this Cavs team. This will be more difficult to do so on the road, as shown in the Cavs 102-81 loss to the TrailBlazers, where the Big 3 combined to shoot only 14-43 from the field. While this could be considered an off-night, the Big 3 will definitely draw criticism if they cannot improve their shooting and efficiency.

Although the roster consists of many veteran players, very few of them have actually played together. Therefore, a lot of attention will be focused on how well the team plays together. The key to winning games in the NBA is a combination of good team defense and minimal turnovers. Through the first 3 games of the season, Coach Blatt has experimented with many different lineups to see who plays well together. He will have to get his rotation figured out, as consistency is key in building team chemistry.

The Cavs will be playing away games at some of the noisiest, packed arenas like TD Garden, Madison Square Garden, United Center, Oracle Arena, and Rose Garden, to name a few. Although booing LeBron at away games has lessened since 2010, which was his first year on the Miami Heat, fans of the home team will always be loud and raunchy when it is crunch time. This brings a special intensity to the game. When the home team goes on a run, the home crowd gets pumped up and starts to cheer, which puts more pressure on the away team (i.e. Cavs) to perform. The only way to silence the crowd is with an answer basket by the away team. Otherwise, the crowd will only continue to get more amped with every basket or defensive play made by the home team. It will be interesting to see how the Cavs players respond to the intense away fans, seeing that they have a rookie coach that is not used to coaching in fully-packed arenas and a team that is still working on its chemistry.