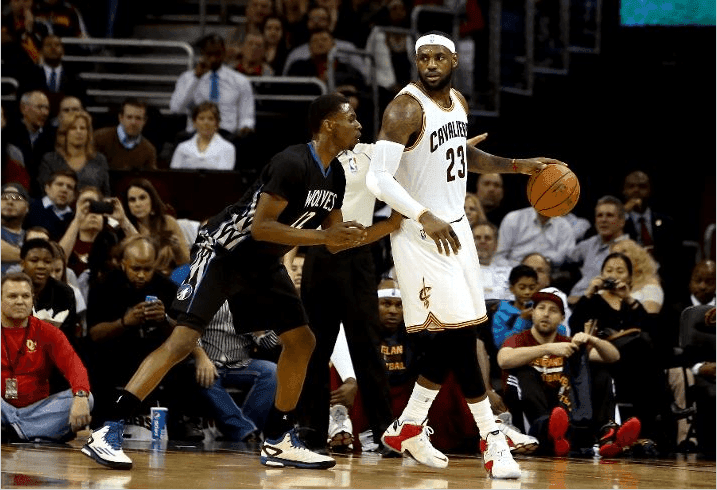 The Cleveland Cavaliers (17-10) coasted to a 125-104 victory vs the Minnesota Timberwolves (5-22) in what was another successful Fan Night at Quicken Loans Arena. Kevin Love scored 20 points and added 10 rebounds in his first game vs his former team, and the Cavaliers did not look ever in doubt of losing this one.

The Cavs Big Three was in full force tonight, scoring a combined 73 points and 20 rebounds. Kyrie Irving had an impressive game, weaving in and out of the lane with clever dribble moves while always looking threatening to score. Another big storyline tonight was the return of 2 number 1 overall picks to Cleveland, Anthony Bennett and Andrew Wiggins. Wiggins had an excellent game, scoring 27 points while also adding 2 rebounds and 2 assists. Anthony Bennett was much quieter, missing all four of his shots and only grabbing 3 rebounds in 15 minutes. Anderson Varejao went down in the third quarter with what the Cavaliers are calling an ankle injury and he was assisted off the court; the Cavs most prominent Center will have an MRI tomorrow, but the team doctors fear the worst. Many speculate the possibility of a torn achilles heel, a long-term injury that can finish off an already vulnerable Cleveland frontcourt.

Tonight’s hero should go to none other than the big man, Kevin Love. Love was playing under tremendous pressure tonight, playing vs his former team with his new team on fan night, and he certainly delivered. Whether it was Love hitting the 3 from the corner, grinding low for the rebound, or playing good help defense, he was all over the floor and dominated his former team recording another double-double.

Click the next page for the Top 5 plays of the game:

Dion Waiters hits Kyrie Irving with a perfect bounce pass in transition to give his counterpart an easy layup. Waiters is clearly starting to gel with the offense, having now scored double digits in two consecutive games while making plays for his teammates.

#4 Kyrie’s Back-Door Cut and Finish at the Rim

Kyrie Irving’s out and in move off the ball allows Dellavedova to easily pick him out in a crowd and Kyrie delivers with an excellent finish at the rim.

Kyrie’s never ceases to amaze everyone with his dribbling finesse as he shows a clinic on his defender and gets to the paint for the tough basket.

#2 Dion with Another Alley-oop to LeBron in Transition!

Dion Waiters’ speed in transition allows LeBron to park himself underneath the basket for the easy pass and jam. Another example of how Dion’s game is finally coming full circle with the Cavs’ system, as he is now successfully making transition plays.

Continue to top play of the night on the next page!

#1 Zach LaVine gets torched by Kyrie

The rookie out of UCLA had no answers for Irving’s game tonight as he and the entire Timberwolves defense was tortured all night.