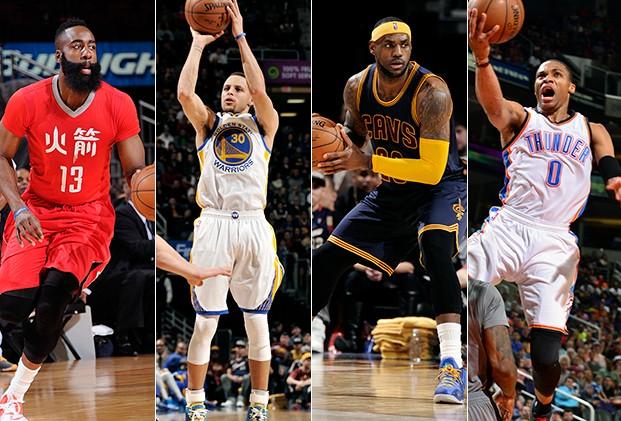 The NBA season is winding down and the MVP race is as tight as it’s ever been in past seasons. At this point, we usually know who is the clear but MVP, but this season has seen a roller-coaster of candidates. That being said, we look at the top five candidates to win this season’s MVP award through April. Since it doesn’t seem like the Thunder will make the playoffs, we’ve excluded Russell Westbrook.

Marc Gasol has led his Memphis Grizzlies to the third seed in the West. The injury bug seems to have hit them however, as Zach Randolph, Tony Allen, and Mike Conley have all had to deal with injuries this season. Look for Memphis to secure home-court in the first round led by Gasol, who won’t win an MVP this season.

Click ‘Next’ to see who we think will win come up fourth in MVP rankings this season! Anthony Davis has been proving all the doubters wrong this season. Many said the Pelicans were far from making the playoffs, but one look at the standings shows them in the number eight spot. They also hold the season series tiebreaker against the team they’re competing with for that spot, the OKC Thunder. If the Pelicans were to have finished in the top six in the West this season, Davis would be a very serious contender for the MVP award.

Click ‘Next’ to see who we think will win come up third in MVP rankings this season! LeBron James’ team sits at 50-27, and that’s with him missing two weeks of action. Fans can only say ‘what if’ when thinking of how the Cavs record could’ve improved if James were healthy enough to play those two weeks. He’s ranked third in our MVP Rankings, and it doesn’t seem like he’ll get it this year.

Click ‘Next’ to see who we think will win come up second in MVP rankings this season!

Even with Dwight Howard going down, James Harden has kept his team afloat in the ever-competitive Western Conference. Sure, he’s had the help of some role players like Josh Smith, Corey Brewer, Jason Terry, and Donatas Motiejunas, but they’re not Howard. He leads the league in 30-point games and even had a pair of 50-point games about a week apart from one another. Harden and the Rockets will likely finish with home-court advantage in the first round, but it remains to be seen how far they’ll go with Harden as their leader.

Click ‘Next’ to see who we think will win the MVP award this season! When the starting point guard for the best team in the NBA is the best shooter in the league, is fourth in steals, fifth in assists and ninth in scoring, he should be high on anyone’s MVP list. The fact that Curry is doing all this with a brand new coach and while his team has vastly improved their defense goes to show that he has a good chance the MVP award. Barring any crazy play from Harden or James and a letdown from Curry, he should run away with his first MVP trophy.