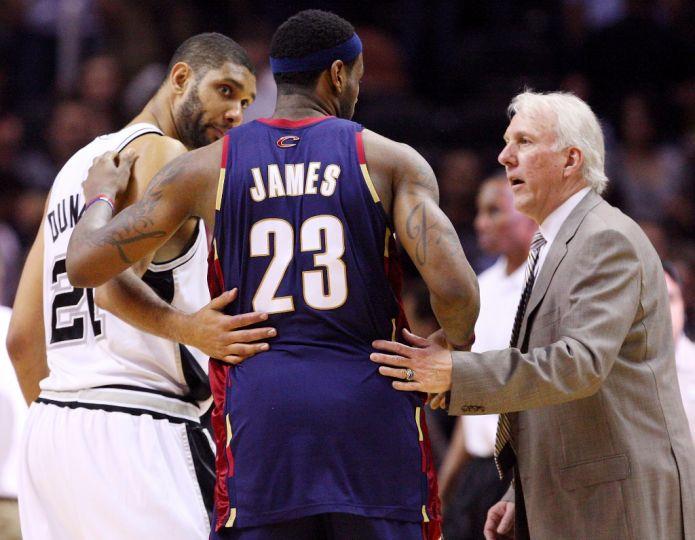 In his rookie season and his first game against the San Antonio Spurs on the road, LeBron James put up a spectacular line of 32 points, 11 rebounds, two assists, two steals, and a block. LeBron and the Cavaliers would defeat the Spurs 89-87.

Click “Next” to see the fourth best LeBron vs. San Antonio Spurs moments!

In what has become one of James’ most memorable dunks, it started with the Cavaliers getting a defensive stop on the Spurs. LeBron maneuvers his way down the court, uses a Drew Gooden screen and drives hard at the basket palming the ball and throws it down over the unsuspecting Tim Duncan, who was trying to take a charge on what he thought would be a LeBron layup attempt. Watch the dunk here:

Click “Next” to see the third best LeBron vs. San Antonio Spurs moments!

LeBron James led his team through the modern-day ‘Bad Boys’ in the Detroit Pistons back in the 2007 playoffs as he and the Cavaliers advanced to their first ever NBA Finals, where they would face the San Antonio Spurs. Winning the Eastern Conference Championship and advancing to the Finals was one of the biggest moments in Cleveland sports history since the Browns won the NFL Championship back in 1964. It wasn’t even called the Super Bowl back then! Unfortunately for LeBron and the Cavs, the Spurs Big Three were in their prime years and were able to absolutely dominate the Cavaliers in what was a four-game sweep. LeBron took that loss as one of the biggest lernign experiences of his life and made him the man you’ll see in our next two pages! Here are the highlights from the game that sent them to their first NBA Finals:

Click “Next” to see the second best LeBron vs. San Antonio Spurs moments! In Game 6 of a hard fought series between the San Antonio Spurs and the Miami Heat, LeBron James and his team find themselves down 10 to start the fourth. Ignited by LeBron’s headbandless play, the Heat came back in spectacular fashion late in the game, and were able to defeat the Spurs in overtime.

James finished the game with 32 points, 10 rebounds, 11 assists, and three steals. Here are the full highlight’s from the game:

Click “Next” to see the best LeBron vs. San Antonio Spurs moments! LeBron James finished with 37 points, 12 rebounds, four assists, and two steals to cap off another NBA Championship for him and the Heat.