Top 10 Reasons Why Kyrie Irving Is Better Than Rajon Rondo Kyrie Irving and Rajon Rondo are two different point guards who have battled it out five times with the former Kentucky Wildcat winning three games. However, the former Duke Blue Devil seems like he’ll catch up with the way the Cleveland Cavaliers have been playing as of late. Individually, Rondo has proven himself more than Irving on the biggest playoff stages, but Irving, as good as he already is, still has room to excel and this should set him up to convincingly overtake Rondo in short time. This year, Kyrie Irving has stepped up in a big way and we will now enumerate ten reasons why he is already the better player, starting with number 10:

Rajon Rondo is no scorer and the ability to make buckets allows Kyrie Irving to maximize his options offensively. He has a wide array of moves and he can take over an opponent in a multitude of ways. Over their last five matchups, Irving has dominated Rondo in this area with respective averages of 23.8 to just 9.4 points per game.

Click “Next” to see the ninth reason Kyrie Irving is better than Rajon Rondo! 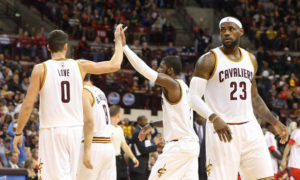 JUST IN: Looking Ahead At The Cavs 4-Game Road Trip