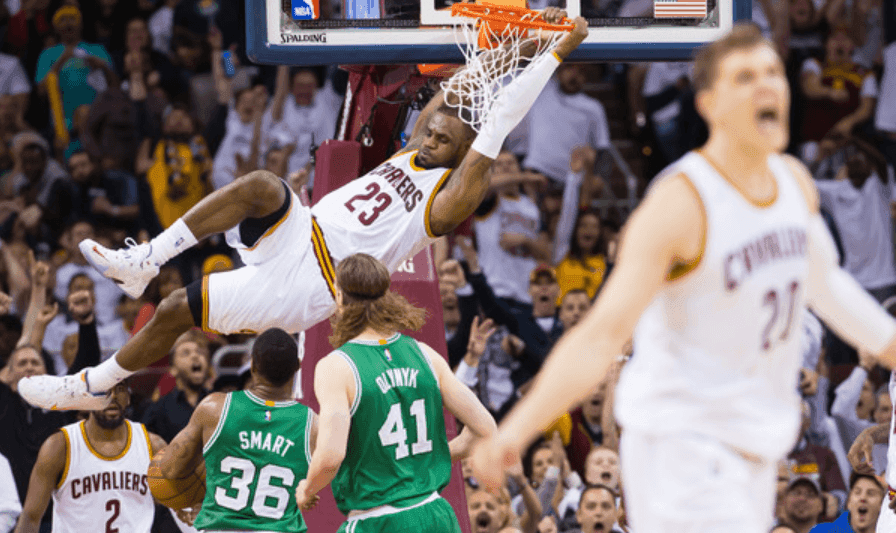 The Cleveland Cavaliers defeated the Boston Celtics in the first round of the 2015 NBA Playoffs. It wasn’t an easy task by any means, but the Cavs were able to pull off four victories filled with highlight reel plays. With the Cavs and Celtics set to renew their rivalry tonight in Boston, we look at the top 10 plays from the Cavaliers-Celtics first round matchup, starting with numbers 10 and 9:

LeBron James, who was trapped in the corner, throws a cross-court pass to J.R. Smith, who finds Love at the top of the key for three!

Kyrie Irving takes the Mozgov screen, drives to the basket, and euro-steps around former Cavalier Tyler Zeller and floats it in!

Click “Next” below for sixth and fifth best plays from the Cavs-Celtics first-round series!

In Game 3: Kyrie takes the pick from Kevin Love, drives towards the middle, and slips a pass to Mozgov, who slams it down!

In Game 4: LeBron James takes the pick from Mozgov. With the Celtic defense draped on James, LeBron bounce passes inside to Mozgov for the one hand stuff!

Kyrie Irving has learned a thing or two from LeBron James. One of those things includes James' patented come-from-behind block that he pins against the backboard. Here, Irving does just that, coming from behind Evan Turner and blocking his shit right off the glass!

Click “Next” below for fourth and third best plays from the Cavs-Celtics first-round series!

Brandon Bass takes Tristan Thompson to the basket, but Timofey Mozgov comes from the strong side and blocks him from behind. LeBron James takes the rebound and hustles down-court, finding Kyrie Irving for the wide open three-pointer

Evan Turner goes hard at the rim and tries to dunk the ball home. But LeBron James comes up and swats Turner at the time. After the play, James lets Turner knows it was a good try.

Click “Next” below for top two best plays from the Cavs-Celtics first-round series!

2. Jones At The Buzzer

James Jones catches the pass from Matthew Dellavedova, takes one dribble to free himself up, and knocks down the three-pointer at the buzzer! It was the second three-point buzzer beater of the game for the Cavs!

And Here's the bench celebrating after the shot:

1. Kyrie At The Buzzer

Kyrie Irving shakes and bakes Evan Turner and hits the 28-foot three-pointer at the buzzer!