Three outside-the-box players the Cavs should try out The Cleveland Cavaliers have been on a constant search for free agent help after the offseason losses of Matthew Dellavedova andTimofey Mozgov.

When you lose your backup point guard and center, it hurts, especially as the season drags on. As the trade deadline (February 23rd) creeps up, things will heat up, and multiple rumors should surface.

No contract has been handed out yet, so let’s have some fun and throw some off-center suggestions to David Griffin, of who we’d like to see as a new member of the Cleveland Cavaliers.

Josh Smith last played in Houston, and helped the Rockets overcome a 1-3 deficit in the NBA playoffs before it became cool for other teams to do so. He’s a crafty power forward who seems to have lost his touch as he’s gotten older, but was an absolute force earlier in his career.

Although he is incredibly talented, one of the biggest issues with Smith is his love for the outside shot when he simply can’t shoot a high percentage long, mid-range shot or three-pointers.

For his career, Smith averages 14.6 points, 7.5 rebounds, 3.1 assists, 1.2 steals, and 1.9 blocks in 32.5 minutes per game. Although he would not be playing nearly that much with the Cavs, using Smith in bursts as a defensive-minded big could help the Cavs with their problem as a big man.

This guy was a legend at BYU, putting up insane numbers, and featuring heavily in their record books. After a few failed seasons in the NBA and NBA D-League, Fredette decided to give the Chinese Basketball Association a try.

Jimmer Fredette is averaging 37.0 points a night, thats right, THIRTY SEVEN POINTS A NIGHT. Yes, its the Chinese league, but that’s insane. Playing behind Kyrie, getting a chance to play alongside LeBron James and Kevin Love, this would be fun to watch.

For this to work, the Miami Heat would obviously need to buy out Bosh and his huge contract, and he’d have to settle for a base salary in Cleveland. But if there’s a guy that LeBron James would re-structure his contract for in the entire NBA, it would be Chris Bosh.

Bosh has been shut down by the Heat due to his relentless blood clotting situation, and we’re all cheering for him to be medically cleared. The Heat are fianlly expected to waive the two-time champ on March 1st.

Go and make it work Griff. 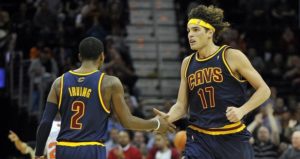 JUST IN: Anderson Varejao has officially cleared waivers and could fit right in with the Cavaliers
Related TopicsCavaliersChris BoshJimmer FredetteSteve Nash