By Will Goodall · 8 min read 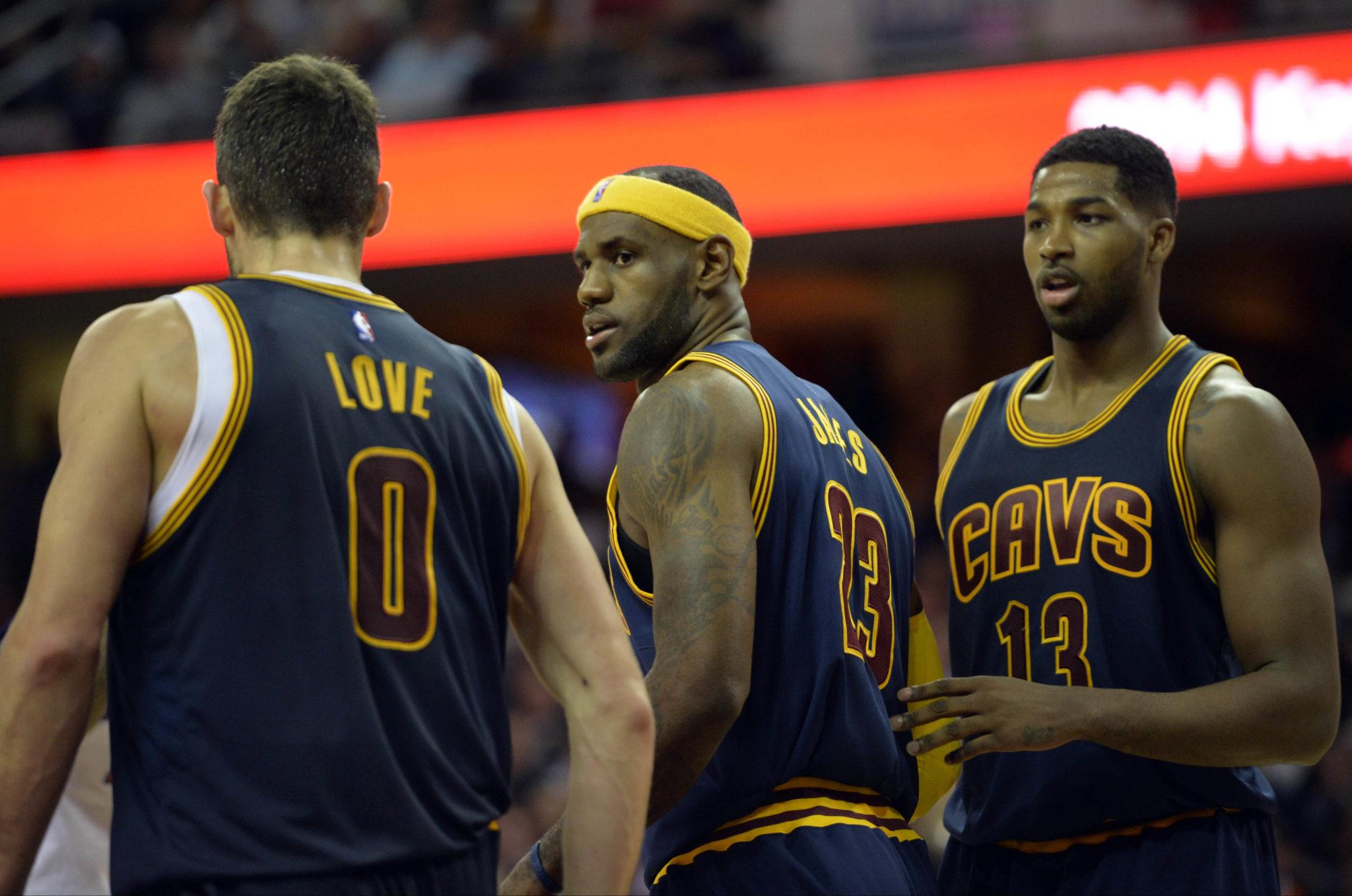 Alright. Let’s address a problem that doesn’t exist, yet everyone thinks it does. Let’s finally talk about trading for a shot-blocker.

Cleveland has the league’s third best paint defense. Two of their three big men are averaging double-digit rebounds a game. Cleveland just beat the league’s most explosive team, The Golden State Warriors, in large part due to their rebounding on the offensive glass. Cleveland out-rebounded Golden State on offensive boards alone 18 to five. That being said, a good amount of noise is being made about Cleveland’s lack of a true shot blocker (completely ignoring the fact that Tristan Thompson is top twenty in blocks per game) and injury of Chris Anderson. Therefor I feel somewhat obligated to go against facts, such as Cleveland’s far higher priority on a third complimentary wing defender such as Tony Allen, and talk about some options Cleveland should be looking at for big men, that is, if they’re looking at all.

DeWayne Dedmon:
Playing limited minutes on the Orlando bench, Dedmon was booked as a defense first front court anchor that just needed to find the right place to thrive. Unfortunately for Cleveland, San Antonio had the same idea, and snatched up Dedmon early in the free agency period.

Dedmon per 36 minutes is averaging the numbers of a career role player. Putting up 11.3 points, 13 rebounds and 2.3 blocks per 36, Dedmon looks like a consistent option as a front court partner for any rebound-first big. He doesn’t have range, which for Cleveland might be a problem, but only playing 15 minutes a game for San Antonio, he’d fit well into a backup center roll for Tristan Thompson, allowing Cleveland to run Frye-Dedmon lineups while Love and Thompson rest for stretches. Dedmon on San Antonio sees limited minutes due to the trio of LaMarcus Aldridge, David Lee and Pau Gasol manning the front court for most of the game, and while it’s unlikely he’d crack more that the back of the rotation, Dedmon could provide a solid role-player option throughout the campaign, and give starters a chance to rest during the regular season/early playoff rounds before Cleveland shores up its roster to around eight.

The biggest challenge Cleveland will face trying to pry Dedmon from the Spurs is availability. San Antonio is notorious for not being busy around the trade deadline. Here is a list of every single trade involving players San Antonio has made in the past five years according to ESPN’s transactions database:
February 20th 2014: Traded G Nando De Colo to the Toronto Raptors for G Austin Daye.
July 9th 2016: Traded F Boris Diaw, a future second-round draft pick and cash considerations to Utah for the rights to G Olivier Hanlan.
…and that’s it. The only other formal trade San Antonio made during that time span was trading for the 15th overall pick in the 2011 NBA draft, Kawhi Leonard. San Antonio prides themselves on signing players they find to be diamonds in the rough, or building through their own farm system. With Dedmon, its likely GM R.C. Buford feels he found a guy that might play potential stopgap in the void that Tim Duncan left after retirement.

San Antonio is a contender, meaning despite Dedmon’s low usage, he still is a commodity that Buford wouldn’t likely just give away to another contender, even if the price was right. Instead, Cleveland may want to look at getting a rental from a non-contender, and there’s just such a player on another Texas team.

Andrew Bogut:
I’d argue that Cleveland won the NBA finals last year not necessarily because of Draymond’s suspension, cold shooting from Steph or a lack of offense in any manner. No, the series turned the second that Golden State Center Andrew Bogut went down midway through the third quarter in game five. The dynamic of Golden State’s defense was lost without Aussie anchor Bogut, and it could already be seen during the Christmas Game against Golden State this year how much less Zaza Pachulia provides as an anchor for Golden States defense. With that being said, Cleveland might be willing to keep their title hopes alive at the cost of some young talent and a pick to snap up Bogut.

Bogut brings things to the table that simply don’t show up in the box score. When being discussed by The Starters on NBA.com, they talk about how Bogut isn’t your double-double guy. Rather, Bogut works well as an off ball option, he isn’t going to be your lead scorer, or your first rebounding option. He brings hustle and presence on the defensive end. On Cleveland, Bogut would likely play a similar role to Timofey Mozgov. Would he start? Depends on the matchup, but with a younger talent such as Bogut on the roster, Thompson might be shifted over to a 6th man roll unless the opponents were rolling out a smaller lineup. Likely Bogut and Thompson would share minutes at the Center position, allowing Lue to shift between a true center, and a small-ball one. The problem with Bogut, however, isn’t availability or skill, its price.

According to HoopsHype, NBC sports and many others, owner Marc Cuban is toying with the idea of trading Bogut to a contender in exchange for a pick. If you’re Dallas this is an easy sell. You bought Bogut from the Warriors at a discount, and flipping him the other way, in the last year of his contract for a young guy to help your rebuild makes perfect sense. What gets tricky are the terms of purchasing Bogut. A contender, such as Portland or Boston, is only going to get Bogut for a season. He is trying to prove that he is worthwhile and deserving of a contract, which since he’ll be a UFA at the end of this season, likely won’t come from the team that trades for him. Because of this, the price of Bogut may scare teams off. Cuban is pricing Bogut at either a late first round pick plus incentives (second round pick, young guy with upside, protected first round pick et cetera…) or a lottery pick. For a team like Boston that might be worth the Brooklyn pick, or for Portland shipping out one of their overabundance of big men along with their first could be worth the swap; but Cleveland is already limited in their drafting ability for the future, and sending off a pick and an asset might hurt a little more in the future than Cleveland would like. That being said, in a report according to Jeff Zillgitt of USA Today, Cleveland is willing to take on the tax burden of using their TPE, or shipping out players to balance salary as long as their rotation doesn’t take a hit.

Omer Asik is an example of a guy whose contract went from looking absolutely horrible two years ago, to a swallow-able pill for a team looking to improve their front court defense based only on the increased salary cap under the new CBA. When Asik signed a five-year, 52 million dollar contract, it looked actually maddening to sign on a defensive center to such a deal before the details of the new salary cap came out. Now, that’s just slightly above average pay for a role player, and may actually look even lighter when the cap spikes to 120 million in 2020.

I’ll be honest, I wouldn’t be the first guy to jump on the Asik train. I don’t think he provides more than either of the other centers mentioned above, though if Cleveland is looking through the bargain bin for their big man, Asik might ironically come cheaper than a rental or end of the bench guy. The New Orleans Pelicans don’t love Asik on their squad, especially for his price. Terrence Jones has all but replaced Asik as Anthony Davis’ running mate, with Asik dropping down to around 16 minutes of playtime a game. If Cleveland really thinks they need a center, and no one else is available, Asik could fill a similar role to Andrew Bogut. He’s a true center that takes up space in the lane, and is known for his shot blocking and defensive prowess. He also comes along with another two full years of contract, and at age thirty he fits well into Cleveland’s championship window. However these extra two years could come as a curse. If Cleveland doesn’t get the value they wanted out of Asik, they’ll be stuck with him for another two years, and likely will have to sell lower than they bought him for in the first place. Cleveland has stated that they were at one point interested in Asik last year, perhaps if the price is right, that interest may resurface.

That being said, trading for Asik at his bottom value shouldn’t be too expensive. As long as salaries balance, Cleveland should be able to just ship off the deadweight on their bench and a second rounder for Asik. This would be a win-win for both teams. Cleveland gets a serviceable role player who doesn’t require the ball to be in his hands (almost at all, he’s averaging three points on 16 minutes a game, and a 59% free throw percentage), and the Pelicans find a way to clear 10 million in cap space, that they could use to lure a potential big name free agent target in the next year or two, such as Blake Griffin, John Wall or DeMarcus Cousins. In the end both teams feel slightly better about their situations, but really neither side of this trade is directly getting a difference maker out of this trade. Bottom line, Cleveland shouldn’t rule Asik out of the potential names for a trade, but he should be a last second emergency option, not Cleveland’s first goal during trade season.

And so, the search for a big may be unnecessary, but it’s certainly not hopeless.