The Cavs will not be opening the season with their Wine nor Gold; rather, it will be a Navy Blue-out in the ecstatic atmospheric conditions of the Q tonight. Tip off is at 8 pm.

Your wine & gold will rock the navy. #AllForCLE#CavsOpenerpic.twitter.com/caorExUtAq

With approximately 20,000 people representing Navy Blue, a new image of Cleveland will be consecrated with the Cavs’ bright future.

1 HOUR until doors open. Your seats are ready, #Cleveland. #AllForCLEpic.twitter.com/4y30auPCa7 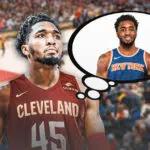