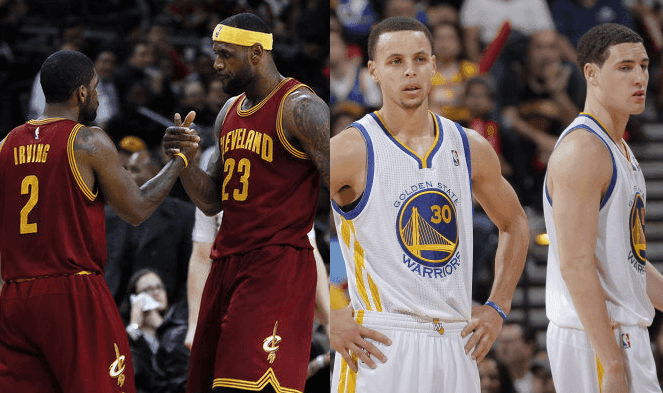 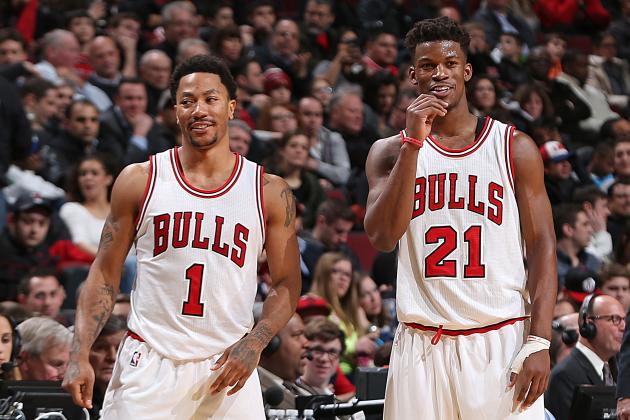 There are a number of dynamic duos that play in the NBA right now. Every so often fans get to see one of these duos pull off a Sportscenter Top Ten Play when they connect for a scintillating play or simply stuff the stat sheet. On that note, Cavs Nation zeroed in on the NBA’s top one-two punches, focusing on both parts of the tandem and laying out expectations for next season.

Last year, Derrick Rose showed glimpses of his not-so-old MVP form. He averaged a modest, based on his standards, 17.7 points, 4.9 assists, and 3.2 rebounds per game for Chicago. He proved his doubters wrong as displayed to everyone the elite version of Derrick Rose from time to time. Rose also gave the Cleveland Cavaliers absolute fits in the playoffs and it was topped by his game-winning three to give the Bulls a 2-1 series lead before losing the series 4 games to 2 to the Cavaliers.

Jimmy Butler had a breakout season last year by averaging 20 points along, 5.8 rebounds, and 3.3 assists per contest. One of the best lockdown defenders in the league, Butler earned himself a huge five-year $95 million dollar contract with his breakout play. The Chicago Bulls shooting guard was also named Most Improved Player last season.

The Bulls have a lot of money tied up in these two stars. With a clean bill of health, fans can expect Rose and Butler’s solid efforts to rise next season. Things are looking good for the Windy City as they are once again being primed to go deep in the playoffs as one of the East’s top teams.

Click ‘Next’ to see the ninth best duo in the NBA!

Rajon Rondo joined the Sacramento Kings after having a down year for the Dallas Mavericks last season resulting in below standard numbers of 8.9 points, 7.9 assists, and 5.5 rebounds per contest. With a new environment and a dominant big man to feed, look for Rondo to come back rejuvenated next year playing in the tough Western Conference.

DeMarcus Cousins had a breakout season in 2014-2015. He averaged a career high 24.1 points per game while pulling down 12.7 rebounds per and dishing out 3.6 assists. He was a hot name in trade talks with the most notable rumor being a trade to the Los Angeles Lakers to play alongside Kobe Bryant. Obviously, this trade never happened and Cousins remains a member of the Kings.

There have been some question marks about whether these two players can mesh with each other as some feel that Rondo could take away from Cousin’s looks. These two players are extremely talented and they will make noise next season if their heads are in place.

Click ‘Next’ to see the eighth best duo in the NBA! The Atlanta Hawks went on a big time run last season. They made it to the Eastern Conference Finals after dominating the East in the regular season and this was largely due to these two players that are on the rise.

Jeff Teague had a big campaign last year as he averaged 15.9 points and 7 assists per game during the regular season. These are solid numbers for an NBA point guard but his intangibles are what make him tough to deal with for opponents. He hustles on the court, makes the right basketball play, and converts on those clutch shots. He is a big reason why the Hawks were able to make it to the Eastern Conference Finals and he is expected to become an even bigger catalyst for another Atlanta Hawks playoff run.

Another major contributor for the Atlanta Hawks is big man Al Horford. He is an extremely steady and consistent NBA player. Last season, he was business as usual in averaging 15.2 points along with 7.2 rebounds per game. If Horford continues to get stronger and stays healthy, the Hawks should remain an Eastern elite next year.

Click ‘Next’ to see the seventh best duo in the NBA! The Dallas Mavericks are in an interesting place as an organization right now. To win next year, they needed to find talent and they landed a major piece in Dallas native Deron Williams. Although he only averaged 13 points and 6.6 assists per game for the Brooklyn Nets last season, a homecoming and a veteran cast should be enough to rejuvenate his game.

Dirk Nowitzki is a proven commodity in the league. He has all of the stats, accolades, and even a championship on his NBA resume. Last year, he averaged 17.3 points per game to go along with 5.9 rebounds. The coming season will be his 18th but playing alongside Williams should take some pressure off his old legs. Stay tuned for what this duo has in store for the Mavericks next year.

Click ‘Next’ to see the sixth best duo in the NBA!

The San Antonio Spurs lost in the first round to the Los Angeles Clippers in last season’s playoffs but that doesn’t tarnish the fact that they are a league powerhouse. Tony Parker has been a key catalyst for the San Antonio Spurs dynasty and he continued to do so after averaging 14.4 points and 4.9 assists per game last season. He is a steady player who should have another consistent season next year.

On the other hand, Tim Duncan is beating Father Time in a big way so far. His style of play basically prolongs his career and it also helps that he plays under Coach Gregg Popovich who realizes Duncan’s value and efficiently manage his legs. The future Hall of Famer averaged 13.9 points and 9.1 rebounds last season. The Parker-Duncan duo will always be in the mix as they have not failed in making the Spurs contenders time and again.

Click ‘Next’ to see the fifth best duo in the NBA! 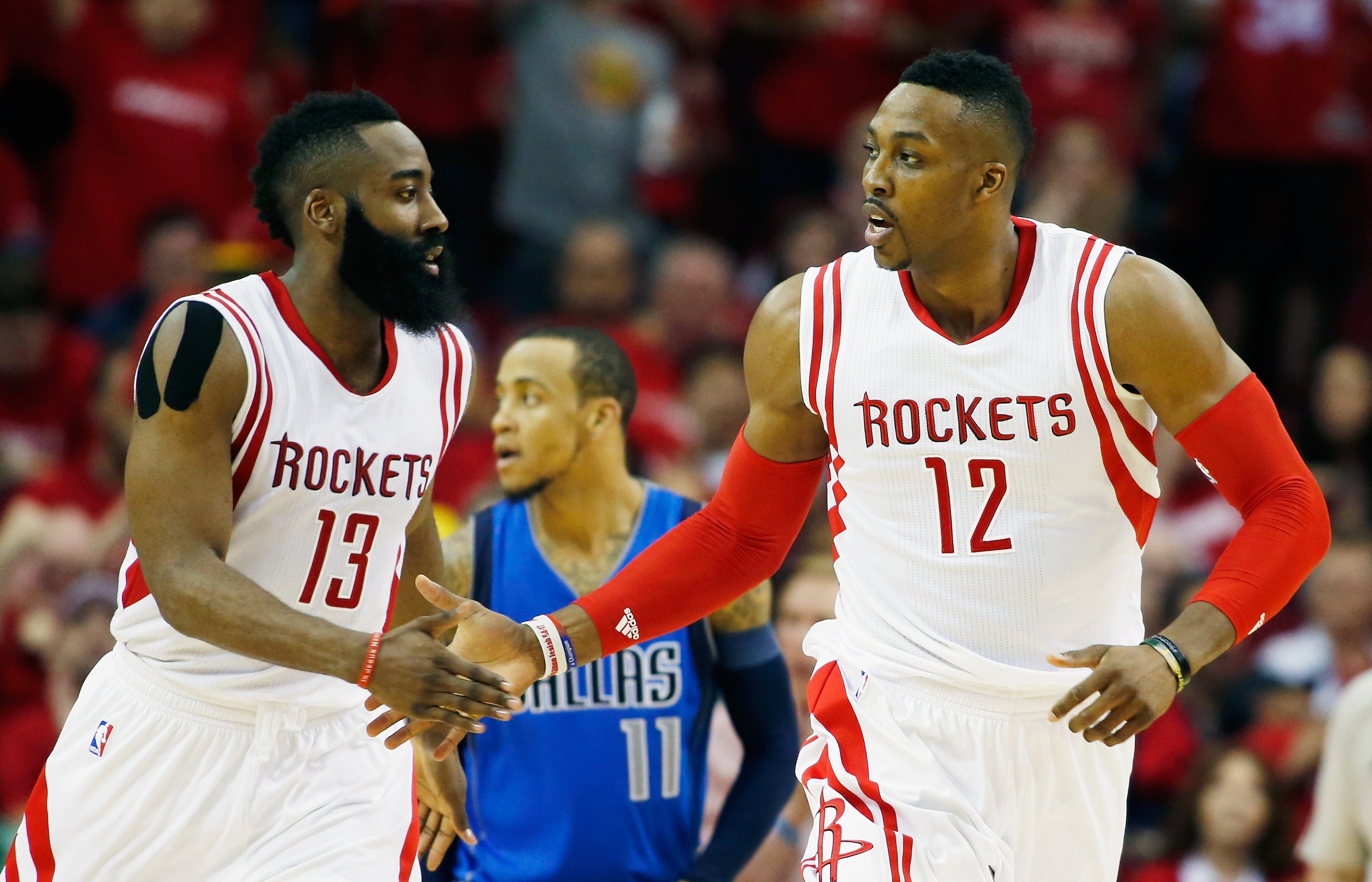 The Houston Rockets’ loss to the Golden State Warriors last year serves as a learning experience for their two leaders in James Harden and Dwight Howard. This duo is scary because one player can light it up at any given time while the other can dominate a game on both ends.

James Harden averaged 27.4 points, 7.0 assists, and 5.7 rebounds per game for the Houston Rockets last year which was good enough to almost win for himself the MVP award. With a couple of disappointments at the back of his head, or beard, look for Harden to have another MVP-caliber season for the Rockets.

Dwight Howard is a force to be reckoned with when he is engaged. If the Rockets could somehow figure out a way to get him more involved, they would be a cinch to emerge as championship contenders again next year. Last season, Howard averaged 15.8 points and 10.5 rebounds per game but those are anomalies as the All Star center is capable of putting up bigger stats on a nightly basis.

Click ‘Next’ to see the fourth best duo in the NBA! 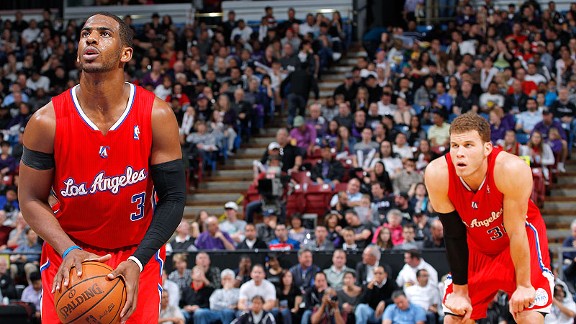 The Los Angeles Clippers were already bolstered with the heavy hitters last season but a major collapse saw them relinquish a 3-1 series lead over the Houston Rockets to end their campaign. Now, Chris Paul and Blake Griffin, the team’s two main stars, are gearing up for another deep playoff push.

Last season, Chris Paul averaged 19.1 points and 10.2 assists per contest. He is still widely considered to be the best point guard in the game today and if Paul plays to his high standards then the Clippers may finally break out of the West and into the finals this coming season.

Meanwhile, Blake Griffin had a big year for the Clippers last season as he averaged 21.9 points, 7.6 rebounds, and 5.3 assists per game. These are excellent all-around numbers and Griffin is not showing any signs of taking a step back. Expect an MVP-caliber season from Blake Griffin next year.

Click ‘Next’ to see the third best duo in the NBA! 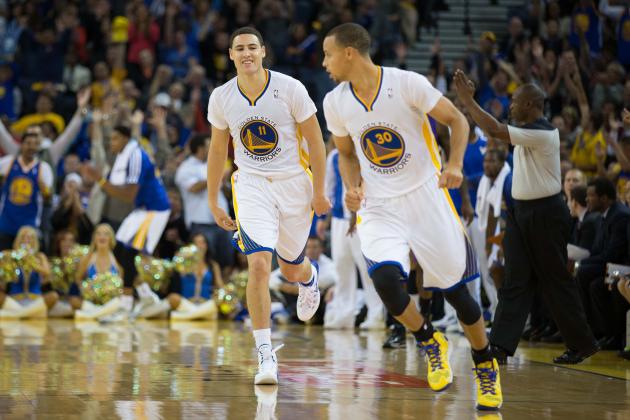 This dynamic duo of Stephen Curry and Klay Thompson was able to lead the Golden State Warriors to the 2014-2015 NBA Title and it will be interesting to see how the Splash Brothers respond next year to the competition.

In his MVP season, Curry averaged 23.8 points and 7.7 assists per contest as the main fuel to a team that won a league-high 67 games. With an MVP award and a championship already under his belt, Curry instantly belongs to an elite group of greats.

Klay Thompson broke out last year and established himself as a star in the NBA. He averaged 22 points per game and there were some nights when he was literally unstoppable. It is scary how well this guy can shoot and his partnership with Curry will always be among the NBA’s best for years to come.

Click ‘Next’ to see the second best duo in the NBA! 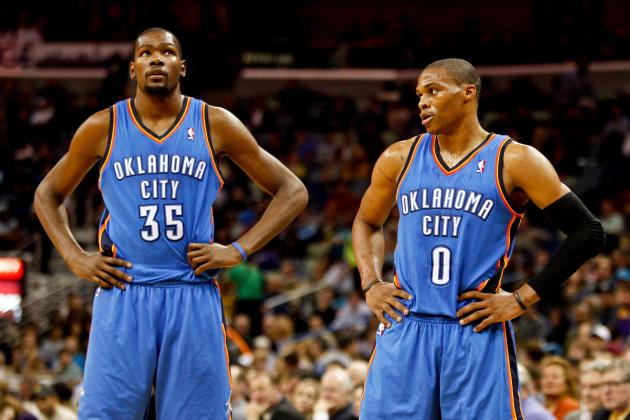 Simply put, the Thunder’s tandem is extremely talented. The injury bug has hit both guys at times but no one can deny that when both players healthy, this duo is instantly one of the two or three best tandems in the league.

Kevin Durant only played in 27 games last year due to an injury where he averaged 25.4 points, 6.6 rebounds, and 4.1 assists per game. These are great numbers for anyone. However, Durant is not just anyone. When healthy, he is an automatic MVP candidate. Kevin Durant comes into next year looking to stay healthy and with something to prove.

Russell Westbrook played great last year and established himself as a true superstar in the NBA. Westbrook averaged 28.1 points, 8.6 assists, and 7.3 rebounds per contest which were definitely MVP type numbers. He was in the conversation and running until the very end of the MVP race. If the Thunder would’ve finished with a better record he would have made a stronger case for the award. If Durant and Westbrook can stay healthy, both players are sure to light up next year which spells trouble for the rest of the league.

Click ‘Next’ to see the best duo in the NBA!

LeBron James is widely considered to be the greatest player on Earth. He controls every facet of the game and it’s no mystery why he has been to the NBA Finals in five straight years. His play and the way he does things as a leader makes every player around him better. He is in the MVP conversation every year. Last season, James averaged 25.3 points, 7.4 assists, and 6.0 rebounds per game.

Kyrie Irving played great basketball last year as he dropped 21.7 points and dished out 5.2 assists on a nightly basis. Irving will be returning from a knee injury which many believed virtually lost the title for Cleveland. He is set to be just fine to start the regular season.

If James and Irving both play strong and steady, while remaining healthy, there is no reason why the Cleveland Cavaliers can’t win it all.