The Six Most-Effective Lineups To Use In The Playoffs 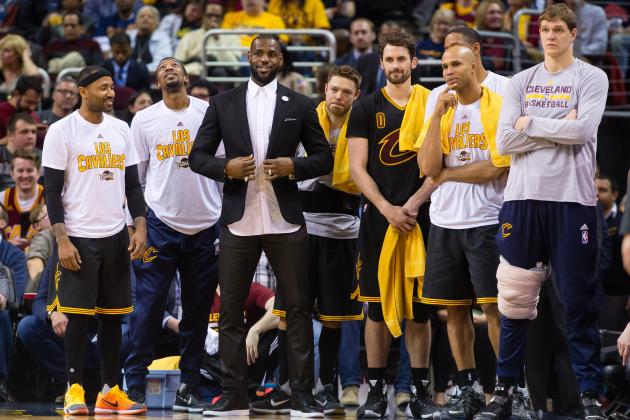 As the playoffs quickly approach, now is the time for teams to figure out their rotation. While figuring it out, teams must also think about which lineups best matchup against specific opponents. For the Cleveland Cavaliers, it is important for them to decide which lineups work best for them when playing against bigger teams, smaller teams, and teams they can spread out and shoot the lights out against. Let’s take a look at the best playoff lineups for the Cavs.

The Cavs have been preparing all year for what could be an NBA Finals rematch against the Golden State Warriors by worrying about a small ball lineup. But, they should not get ahead of themselves. They still need to defeat their Eastern Conference foes and to do that, they will need to have an effective big lineup. If the Cavs need to go super big against a team like maybe Chicago or Detroit in the playoffs, they could effectively use a lineup that consists of LeBron at the point, JR Smith, Richard Jefferson, Kevin Love/Tristan Thompson, and Timofey Mozgov. This is their most effective big lineup because they have a six foot 9 inch LeBron James playing point guard which is a huge advantage. LeBron has the ability to guard any position even good scoring point guards. The Detroit Pistons have arguably the best rebounder in the NBA in Andre Drummond and if the Cavs are going to match his intensity on the boards, they could use this lineup. If the Bulls are able to slide into the playoff picture as an 8 seed, the Cavs could end up playing them also. If this happens, the big lineup might prove useful against a Bulls team that has an overabundance of size.

Click “Next” to see the best LeBron James-featured lineup! JUST IN: Reggie Jackson Got His Preferred Opponent In The Cavaliers