LeBron James threw down one of the nastiest dunks of the season last night, but he also drew a technical foul for taunting Lou Amundson. He posterized Amundson, who was a Cavalier and teammate of James just last year before he was traded to the Knicks in exchange for Iman Shumpert and J.R. Smith (who was just a throw in).

Was it just a normal LeBron James throwdown, or was there anything behind the dunk and staredown? Team sources told ESPN’s Dave McMenamin that it was more than just a dunk.

The New York Knicks were scrambling on defense, down double digits seemingly from the opening tip, when Lou Amundson saw James coming down the court. Amundson, a journeyman who was traded from Cleveland to New York in the Iman Shumpert-J.R. Smith deal last season, waved off a teammate who intended to defend the four-time MVP, declaring, “I got him, I got him.”

No disrespect a former Cavalier, but there’s no one who can check LeBron one on one. Maybe Kawhi Leonard, but LeBron’s had his way with him at times as well.

If you’ve got LeBron one on one, don’t turn down help, or you’ll be embarrassed. 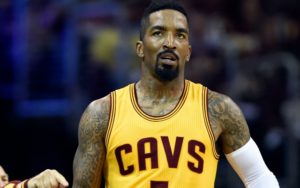