As the Cleveland Cavaliers prepare for the NBA Draft in just 10 days, their arch-nemesis, the Golden State Warriors, find themselves in a deep hole, down three games to one against the Toronto Raptors in the NBA Finals.

Before Toronto’s Game 4 victory, there were multiple valid reasons to resist pulling for the Raptors. Perhaps not enough to become a full-blown Warriors fan for the month, but enough to not go all-in on the Eastern Conference representative. But now, those reasons have vanished, and the Cavs now have plenty riding on the rest of the series.

As stated Thursday, there were arguments for and against rooting for both teams. If the Warriors won, they would have won three championships in a row and four out of the last five, placing them among the elite dynasties in NBA history. This Raptors team is clearly better than any squad that Cleveland ran out over the last five years, except for LeBron James. A victory against Toronto would be perhaps Golden State’s most impressive yet, and they would have done it without their best player for most of, if not all of the series.

But perhaps more importantly, a Warriors victory would secure the Cavaliers’ legacy in NBA history as the only team to take down the Golden State machine. That would be something to hang your hat on as a fan, as no matter what happens in the future, one will always be able to say “Remember how dominant those Warriors teams were? The only team that was able to beat them was the Cleveland Cavaliers, behind LeBron James.” And what’s more, they did it by becoming the first team to ever come back from a 3-1 deficit to win the NBA Finals. It was truly a magical moment.

And now, that magical moment is what’s at stake. Sure, all those pros of a Golden State victory still exist, but one major con has arisen that outweighs all of that. If the Warriors end up winning this series, they will have come back from a 3-1 deficit, just like the Cavs. Not only would Golden State become the second team to ever do that, but they would also shed much of the shame that still follows them from that season. That team finished 73-9, the greatest regular season in history, and then lost three in a row to lose the Finals. 3-1 jokes are still in style, and that would disappear.

In a way, the Warriors coming back to win this series would almost make Cleveland’s victory even more impressive, but at the same time, it could reduce the legacy of that year to the average fan. Cavs fans’ opinions of that team shouldn’t change one bit, but the same can’t be said for the rest of the NBA.

The Cavs now need the Raptors to win to seal that legacy in the eyes of the NBA, and now Cavs fans don’t have any excuses to not root for Toronto. No Cleveland fan should hate the Raptors, as they weren’t much more than a speed bump on the way to the Finals for the Cavaliers. LeBronto should gain nearly 400,000 new fans. 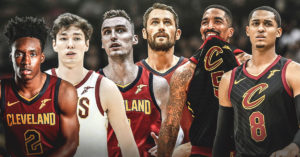