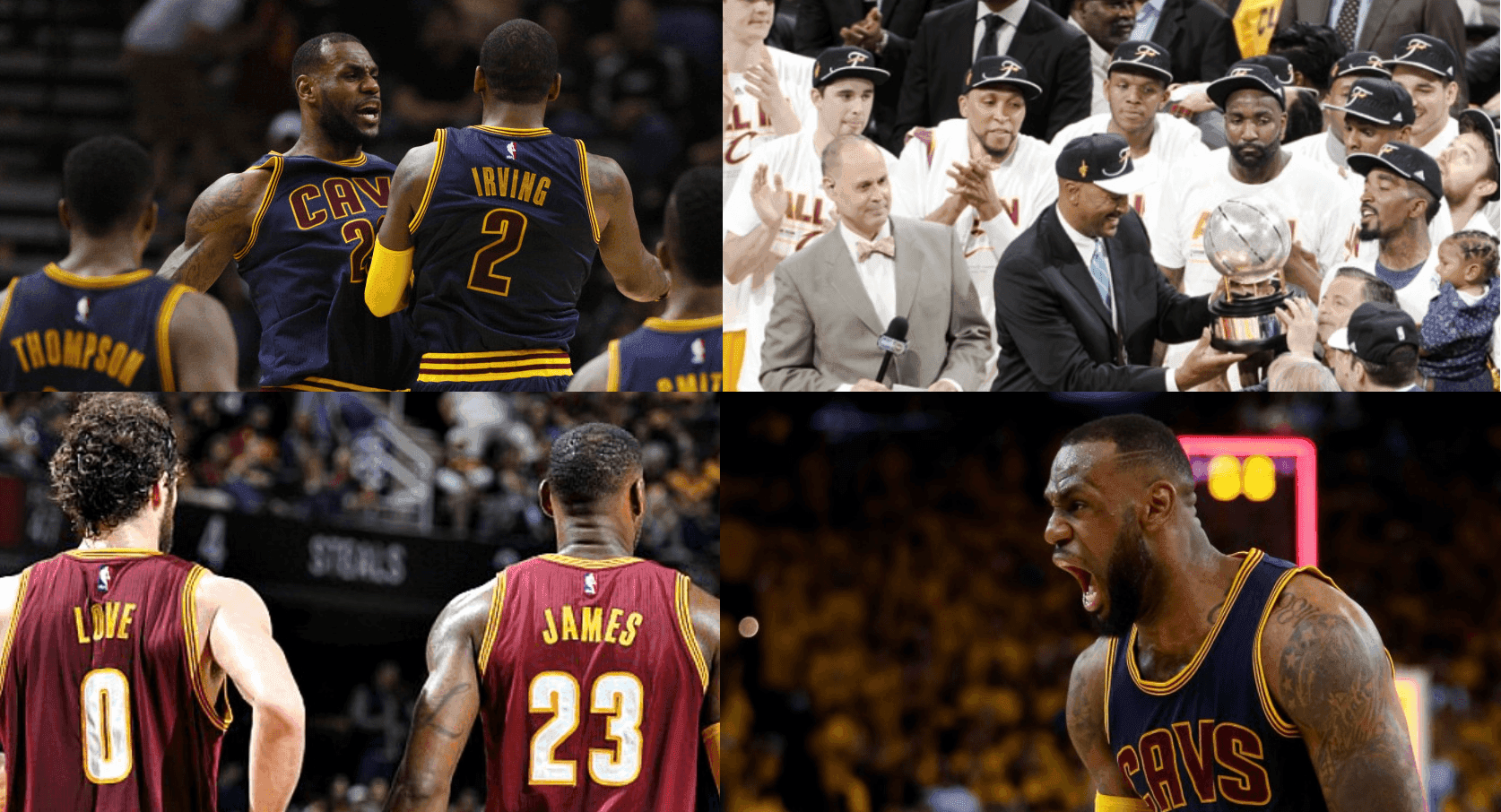 We’re less than one hour away from a brand new calendar year, which means it’s time to go back and look at the greatest moments from 2015! We start from the very beginning. Enjoy, and have a Happy New Year Cavs Nation!

J.R. Smith and Iman Shumpert are traded to the Cavs from a Knicks in a three-team trade, dishing out Dion Waiters to the Thunder. The Thunder also gave the Cavs a first-round pick for the 2016 draft. The Cavs also gave the Knicks a second-round draft pick in the 2019 draft. J.R. and Iman helped improve the Cavs defense and 3-point shooting, as well as bolster the bench. During his 38 games with the Cavs, Shump Daddy boasted stats of 7.2 ppg and 3.8 rpg. On July 9th, the Cavs were able to secure Iman for the next four years with a hefty $40 million contract. However, during the offseason, Iman ruptured a tendon in his wrist, sitting him out 12-14 weeks. Shump made his season debut on Dec 11, scoring 14 in the Cav’s win against the Magic. Less than two months after Shump inked his contract, the Cavs re-signed J.R. on September 2nd for two years/$10 million that includes only $2 million guaranteed for next season. J.R. is currently averaging nearly 11 points and 3 rebounds a game this season.

Right after trading for the shooting guard duo of Iman and J.R., the Cavs continue to ring in the New Year by trading for big man Timofey Mozgov. The Cavs flipped the draft pick acquired from the Thunder just two days earlier, as well as another first-round pick they received from the Grizzlies to get Mozgov from the Nuggets. Timofey served as a much-needed replacement for Anderson Varejao, who was out for the season with a torn Achilles. Along with Tristan Thompson, Mozgov was part of the big-man duo that propelled the Cavs into the playoffs and Finals. On June 4th, Timofey became the first Russian player to play in the NBA Finals, where he averaged 14 points and 7.5 rebounds. On June 23rd, the Cavs picked up Mozgov’s contract option, paying him $4.95 million for the 15’-16’ season. He’s currently averaging 6.7 points and 4.2 boards.

Against the Portland Trailblazers at the Q, Kyrie put on a show for Cleveland, dropping a then-career-high 55 points. Despite missing his first 7 shots, Irving would go on sink a franchise-record 11 threes, as well as go 17-36 from the floor and a perfect 10 of 10 from the charity stripe. Besides setting an arena record for most points (passing Allen Iverson who scored 54 on Jan 6, 2001), Irving would hit a clutch tre with just 6 seconds left to give the Cavs the lead, and then grab a board and knock down both free throws to finish of the Trailblazers.

Click “Next” to see the Cavs’ greatest moments from the 2015 playoffs! 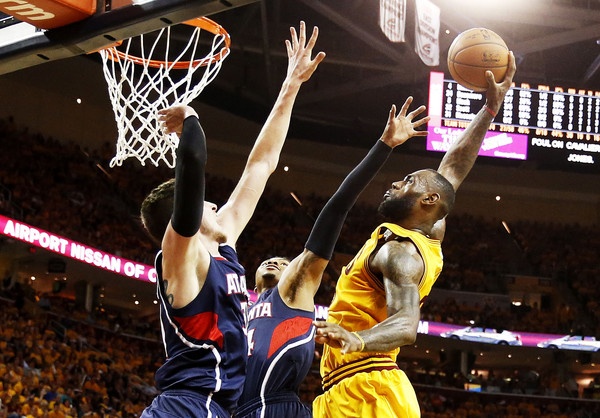 The Cavs face off against the Celtics in the first round of the playoffs. LeBron was phenomenal as always as the Cavs swept Boston to advance to the second round. However, like every rose has its thorns, the series took its toll on Cleveland. During a tussle for a rebound, Kelly Olynk pulled on Kevin Love’s arm, dislocating his shoulder. Love was expected to miss the rest of the Eastern Conference semi-finals, but the injury would later prove to be season ending, require surgery, and set Love out 4-6 months. In a chippy Game 4, Jae Crowder seemed to agitate some Cavs. After a scuffle with Kendrick Perkins, each player was hit with a technical foul. Later in the game while battling for rebounding position, J.R. Smith would go on to swing his arm into Crowder’s face, dropping him to the court with a knee sprain. J.R. was assessed a flagrant 2, was ejected, and also suspended for the first two games against the Chicago Bulls.

Despite dropping two of the first three games to the Bulls in the next round of the playoffs, the Cavs would overcome Smith’s and Love’s absence to win the series 4-2. J.R. would come back to average 12.8 points in the four games he played, draining 12 threes in the process. The Cavs would drop Game 3 to the Bulls, courtesy of a buzzer-beating 3 at the United Center. Kyrie would also briefly injure his knee as it gave out on a drive early in the first quarter. The Cavs would bounce back in Game 4, as LeBron would shock Chicago with a step-back buzzer beater of his own to get the win 86-84. The Bulls would give Cleveland a run for their money in Game 5, keeping it close 106-101, but Game 6 would prove no match for the Cavs as they blew the Bulls out 94-73 to send them to the Eastern Conference Finals against the Hawks. However, Kyrie would be injured again after tripping on Tristan Thompson’s foot. Kyrie was diagnosed with a sprained left knee and was helped off the court early in the second quarter.

The first-seeded Hawks would prove no match to the Cavs, as they swept them handedly, outscoring Atlanta by a total of 53 points. J.R. got hot in Game 1, dropping 8 threes (a franchise playoff record) and 28 points in the series opener. A scary moment for the Cavs came in the second half when LeBron contested a deep three and came down on a camerman’s foot, twisting his ankle. With a sigh of relief, King James would come back and make history. LeBron passed Michael Jordan as the player with the most playoff games with at least 30 points, 5 assists, and 5 rebounds, notching his 52nd postseason game. Kyrie Irving sat out Game 2 with knee tendonitis, as LeBron stepped up and almost earned a triple double with 30 points, 11 assists, and 9 boards. King James would only get more impressive as the series progressed, culminating in a triple double in Game 3, featuring 37 points, 13 assists, and 18 boards as Irving continued to watch from the sidelines. Kyrie would return in Game 4 for 22 minutes, managing to drop 16 on the Hawks. James would also get some rest, playing only 23 minutes. It was a big game for the Cav’s bench, as everyone notched some minutes, and the Cavs dominated the Hawks for a 30 point victory 118-88 in the Q. LeBron would make the record books again, as he became only the 3rd player in NBA history to make the Finals and be an All-Star for 5 consecutive seasons, joining Bill Russell and Bob Cousy. The Cavs go to the Finals for the first time since 2007 in hopes of bringing the Larry O’Brien trophy to Cleveland for the first time.

Despite being quoted multiple times on the value of team accolades over individual achievements, LeBron’s individual efforts rewarded him again this season, as he was selected to the All-NBA team for the 11th time tying NBA greats like Michael Jordan, John Stockton, Bill Russell, and Charles Barkley. LeBron and Steph Curry tied for the most 1st team votes with 129 a piece, followed by James Harden, Anthony Davis, and Marc Gasol.

Click “Next” to see the Cavs’ greatest moments from the 2015 NBA Finals! 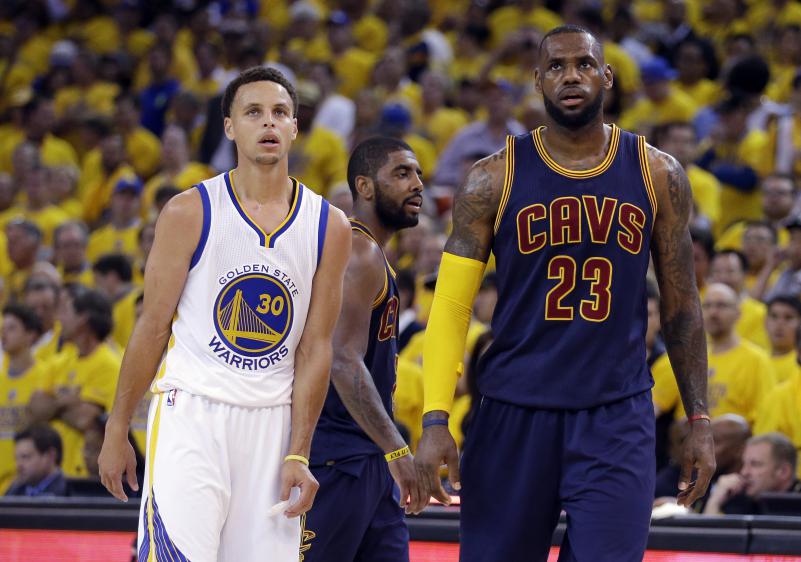 After dropping the first game of the Finals to the Warriors, the Cavs bounced back in Game 2, giving the franchise its first ever Finals win. However, after battling knee injuries throughout the playoffs, Kyrie would go down in overtime; this time for good. Irving suffered a fractured left kneecap and was out for the series. The Cavs would send the first two games into overtime and head back to the Land with the series tied 1-1. LeBron James put the team on his back in Game 2, notching his 5th playoff triple double, scoring 39 to go with 11 assists and 16 rebounds. With two of the “Big Three” out for the series, LeBron stepped up for the remainder of the Finals. He became the only player in history to average 35 points, 10 rebounds, and 5 assists in a Finals Series. He also joined Shaq and Michael Jordan as one of the three players to score at least 40 points in three games in a single Finals Series. The Cavs would take Game 3 at the Q, led behind James’ 40 points, 8 assists, and 12 boards. However, this would be the last win for the Cavs in the season, as the Warriors took the next 3 games to win the Finals. Andre Igoudala would win the Finals MVP award for his defense on James with a vote of 7-4, despite James phenomenal performace, averaging 35.8 points, 13.3 rebounds, and 8.8 assists. A lot of Cavs got their first taste of the playoffs and Finals and are sure to come back hungry for another Finals run in the 15’-16’ season.

Click “Next” to see the Cavs’ greatest moments from the summer of 2015!

Despite not winning the Bill Russel Finals MVP award, James was recognized at the 2015 ESPY’s for “Best Championship Performance”. James once again mentioned his preference for team awards over individual accolades, as he dubbed the award a “second-place award”. After leading all players in the Finals in points, rebounds, and assists, LeBron still wasn’t exactly enthused to win the award. LeBron beat out Madison Bumgardner of the San Francisco Giants, Lauren Haeger of the University of Florida softball team, and American Pharoah, who won the Triple Crown. Many others were also upset with the selection of the winner, as they believed LeBron didn’t deserve the award since the Cavs ended up losing the Finals.

With the season over, it was time for the front office to make some crucial moves for the Cavs future success. On July 1st, the Cavs re-signed Kevin Love, who had entered free agency. Cleveland locked Love in for the next 5 years with a $110 million contract. Love on his feelings of coming back to the Land:

“After Game 1 of the NBA Finals, that’s when it really struck me. Sitting on the sidelines, I never wanted to play in a game more than that one. I had dreamed of playing in the NBA Finals, and I just wanted to help my guys win. I couldn’t have been prouder of them as they poured their blood, sweat and tears onto the court.”

Cleveland can thank LeBron for his role in Love’s re-signing as they had a poolside meeting in late June. On the meeting, Love said “We definitely laid it all out there, hung out, just had a leisurely conversation, and it was one of those moments where I thought we made a lot of good decisions and ended up at the same place. It really played a big part.” Love is currently 17 points and 10.6 boards per game, and is 32nd in the league with a player efficiency rating of 20.88.

After a somewhat lengthy period of negotiation and holdouts, the Cavs were able to come to an agreement with big man Tristan Thompson. The Cavs dropped the qualifying offer of 1 year/$6.8 million, and the two sides agreed to a 5 year/ $82 million deal. Thompson was looking for a max deal of 5 years/ $94 million, but agent Rich Paul, and possibly LeBron James, helped negotiate the contract down to a more reasonable size. Thompson is currently averaging 7 points and 10 rebounds per game coming off of the bench for 27 minutes a game, but is tied for 5th in the league in offensive boards with 3.1 per game. 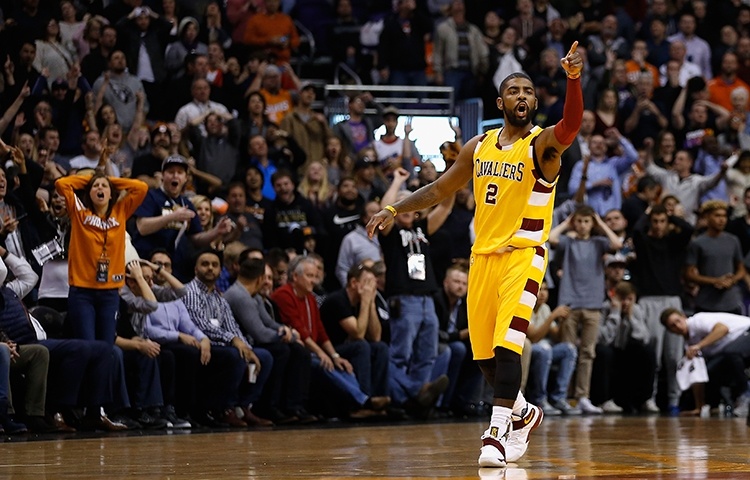 After missing the first 24 games of the season while rehabilitating his fractured kneecap suffered during the Finals, Kyrie made his season debut at the Q on December 20th, playing 17 minutes and notching 12 points, including 2 threes. Despite facing minutes restrictions, Kyrie is working his way back into the offense and finding his stride again. Through four games played, Irving is averaging 13 points and 3 assists.