With the NBA Finals under wrap, the Cleveland Cavaliers are faced with another impending challenge: free agency. Starting July 1st, the floodgates for NBA contract negotiations are opened and teams are given free rein to offer lucrative payrolls to eligible players. One such player is Tristan Thompson.

Thompson, or Double-T as many in the Cavaliers organization like to call him, will be eligible for a new contract deal once free agency commences. However, as a restricted free agent, that offer sheet can come from any team capable and willing to throw money at him. In order for the Cavs to retain Thompson, they will need to match any contract offers that come his way, including the tenable max contract.

Players signed under the max contract will be eligible to receive 25% of the NBA’s salary cap, with a 7% annual increase for 5 years. With the salary cap expected to be around $67 million, we can expect this value to be upwards of $16 million per year.

So then the question becomes, is Tristan Thompson worthy of a max contract? Certainly his postseason prowess following Kevin Love’s injury will have garnered attention around the league. There will be plenty of interest from teams, some likely to throw a max contract his way. The onus will then be on the Cavs to match the offer, or face the troubling reality of seeing him leave Cleveland for another ball club.

LeBron James voiced his desire to keep the power forward, stating that “Tristan should probably be a Cavalier for his whole career.” Knowing the extent of power LeBron holds in Cleveland, his remark may as well be a mandate for the higher ups in the franchise; resign Tristan Thompson, whatever the cost.

Thompson himself has made it known that he will not sign for anything less than the max “or near the max”.

For the most part, a players dollar worth in the league is a factor of win shares; that is, the number of wins a player contributed to his team. This advanced stat calculation involves the measurement of defensive and offensive ratings, so it provides for a fairly reliable indicator of a player’s monetary value. After all, the league is a business, and the money teams pump into their players, they expect to get back in revenue. And more wins yields better returns.

According to an article on fivethirtyeight.com [1], only the 94th percentile (or top 6%) of the NBA is deserving of a max contract based on the market value of their production. Anyone receiving a max-level contract outside of these constraints may be liable for an “overpaid” label. Looking at Thompson’s 14-15’ campaign, we see that he ranks 44th in the league in win shares, putting him in the 91st percentile. However, he was playing a reserve role behind Kevin Love, logging the fewest minutes of his career since his rookie year.

To get a better picture of where Thompson ranks, we need to look at his production rate as a starter, specifically his win shares in the playoffs. Indeed, Thompson has been sensational in the absence of Love, posting the fifth highest win share total for the playoffs, eclipsing only Steph Curry, LeBron James, James Harden and Draymond Green.

However, playoff totals exclude the production of about half the league, so we would need to translate Thompson’s win share total to integrate into the season rankings, and re-evaluate his performance from there. Using a rough calculation procedure, we can convert Thompson’s playoff performance to about 10.25 in season win shares [2]. Check the footnotes for an explanation on how I got this value.

Based on the benchmark we made earlier, we can see that Thompson is indeed worth the max contract -but only if he plays a starting role, and is able to emulate what he did in the playoffs. However, here is wherein the dilemma lies.

Kyrie Irving is already a max contract guy; James and Love likely to sign for short term max-level deals as well. Thompson is the fourth best player on a Cavs team loaded with talent. He also causes a logjam at the power forward spot with Kevin Love. Unless Thompson were to start at center, he’d entertain the rare notion of a player coming off the bench following the signing of a max contract deal.

Furthermore, if he were to come off the bench during the upcoming season, he wouldn’t be able to produce at the level expected of from a max contract player. There are teams around the league that would pay Thompson max money to fill the role as their starting power forward. But for the Cavs, he may just be delegated to a reserve role behind Love, or at best, an out-of-fit starting center position

This scenario draws comparisons to the James Harden debacle in Oklahoma City. The Thunder weren’t willing to go into the hard cap in order to retain Harden, so they traded him in order to save themselves from the luxury tax.

So the question now is not whether Thompson is worth the max deal, but rather, if Dan Gilbert is willing to go deep into his pockets to pay the heavy luxury tax that accompanies the signing of a fourth max contract player. Considering the championship drought in Cleveland, and Gilbert’s passion for the team, my bet is that he will. 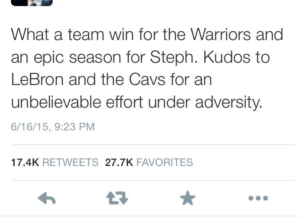