The Importance Of Re-Signing J.R. Smith For Cavaliers 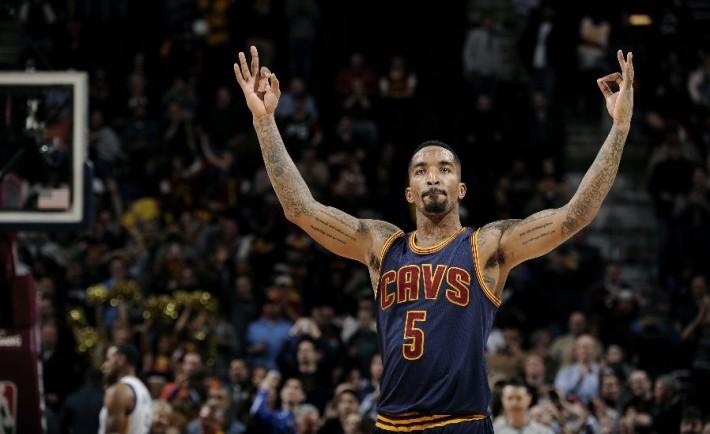 J.R Smith’s reputation seemed to have tarnished any opportunity of earning himself the big pay day he was hoping for. Smith opted out of his player option of $6.4M in hopes of cashing in on his NBA Finals run, only to eventually re-sign for less with Cleveland.

The Cavs seemed to take a stance on the situation, playing hard ball with Smith. According to sources, it didn’t go down well with Cleveland management that Smith tested the market, and they simply were not going to offer him the same money he turned down.

Many believed that Cleveland would only offer Smith a deal worth around $3M a year, but he managed to work a deal out that will see him paid $10M over two seasons. His new contract also includes a no-trade clause, and a player option on the second year. Did Smith deserve all that cash and the thrown in bonuses?

The simple answer is yes. Lets not forget how important J.R was to the teams success late last season, and how many games he had a huge part of changing the outcome.

Cleveland in no way needs J.R Smith to create his shot and do spectacular things by himself. The Cavs have two of the league’s elite play-makers in LeBron James and Kyrie Irving, who simply need Smith in the corner consistently knocking down three balls.

J.R Smith played 46 regular season games as a Cleveland Cavalier last season, and when he shot well, Cleveland won. When J.R shot at 50% or better from the floor, the Cavs went 16-1, that’s a stat that can only make Cavs fans smile.

Speaking of smiling, re-signing Smith made LeBron James a happy man. James has put out publicly on many occasions who he believes Cavs management should be bringing back next season. J.R Smith and Tristan Thompson headlined that list.

The most exciting part of all of this, is being able to see what Smith can do with a full training camp with his teammates. Smith was traded midway through last season, traded away from New York, who would eventually have a franchise worst season.

Smith was a part of a toxic situation. In the bright lights on New York, where admittedly Smith said basketball at times was not the priority. Add that in with playing for a horrible basketball team, Smith had his life changed when he was traded to Cleveland.

Smith was put smack bang in the middle of a city that was craving a champion, and sent to a team that was expected to at least come out of the conference. Smith could then focus solely focus on basketball, he was placed in a city that prides itself on its blue collar work ethic. The staple of that work ethic is LeBron James, a guy hell bent on fulfilling his promise made a decade ago, to bring a title to Cleveland.

Smith will be back in Cleveland, with a contract that he has very much earned, and now he has a championship caliber team around him to help him prove that point. The city, the team, and management will be watching like hawk, hoping that their ten million dollar investment pays off.