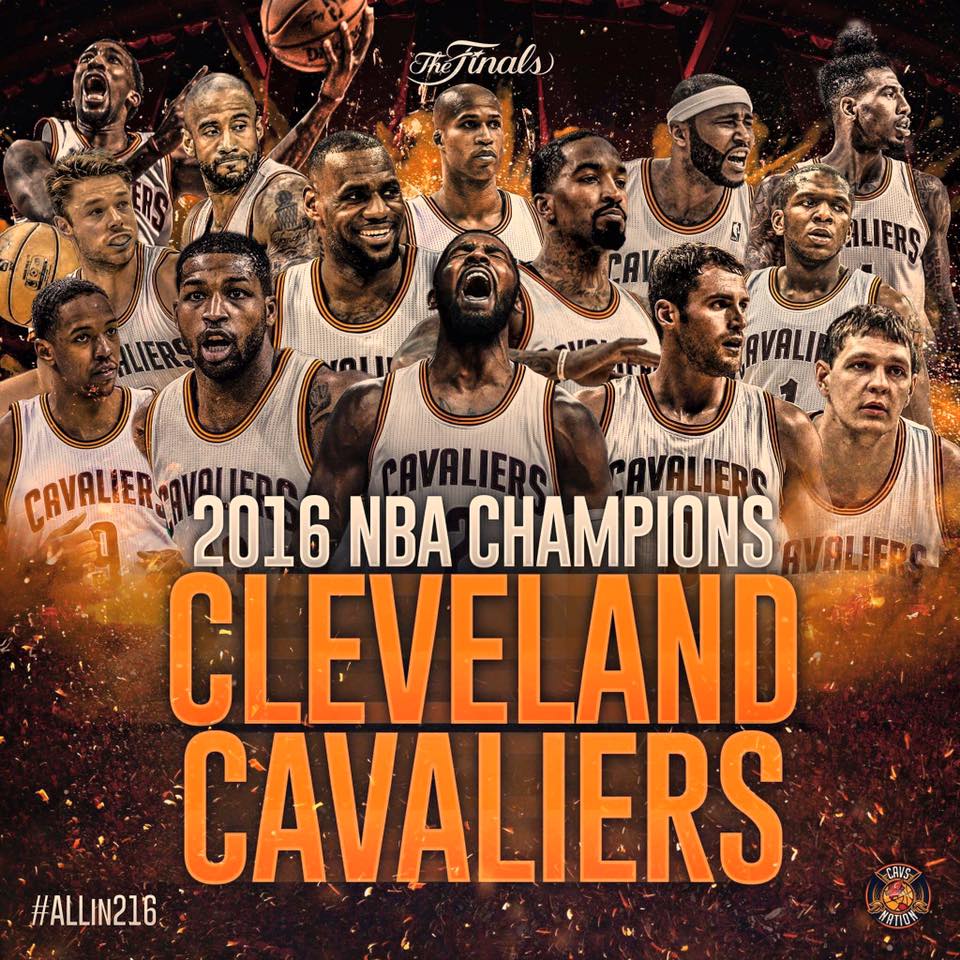 The 2015-16 season was the one every Cleveland Cavaliers fan had been waiting for. Although it had its fair share of drama throughout the regular season and in the playoffs the season ended with a championship coming to Cleveland. With everyone including the team and their fans enjoying all of the championship festivities, the thought of anyone deciding to leave the team in free agency seems like a long shot considering their fairytale ending. However, as the summer progresses and with free agency right around the corner only time will tell. July 1st is the start of free agency and opens the flood gates for any player out of contract to start taking meetings with other teams. The Cleveland Cavaliers alone have seven players that after July 1st will become either restricted or unrestricted free agents. These seven players include LeBron James, J.R. Smith, Matthew Dellavedova, Richard Jefferson, Timofey Mozgov, James Jones and Jordan McCrae. After coming off a history-breaking playoff run, all of these players could be primed to receive major offers from other teams.

Starting with The King himself, LeBron James has the opportunity to opt out of his contract and become an unrestricted free agent. James is expected to do just that. Now that LeBron has fulfilled his promise of bringing a championship back to The Land, some speculate that he could pick up and leave without the heavy criticism he received when he left for Miami back in 2010. This is unlikely given James’ recent statements that he is happy in Cleveland and has no plans on leaving. He seems to be in a point in his career where he can sign a two-year contract with a player’s option after the first year to guarantee himself a raise every year given the tremendous rise in salary cap for the NBA over the years. It is safe to assume LeBron will be back next season and lead the Cleveland Cavaliers as the new defending champions. 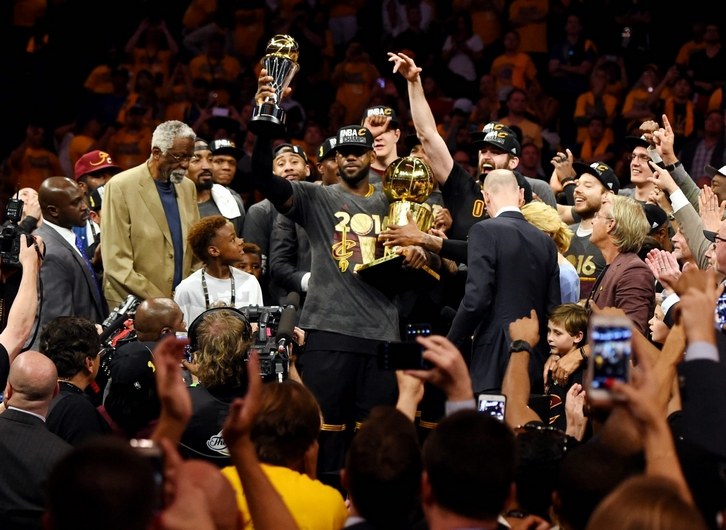 J.R Smith seems to be making the same move he did last offseason and is opting out of his contract in order to receive a larger salary. After last year’s failed championship run, J.R. opted out of his contract betting on himself that he would get larger offers. Offers failed to come in and he ended up taking a lesser amount with the Cavs. During The NBA Finals J.R. Smith opted out of his contract and chose to become a free agent once again. Given that he is an NBA champion now and his great shooting from the three point line this year, 40% during the regular season and 43% during the playoffs, it will be interesting to see what kind of offers he gets from other teams. It is hard to see J.R. leaving Cleveland after the career resurrection he had here, but it is also hard to not think he would be tempted by a big paycheck as he continues into the twilight years of his career. 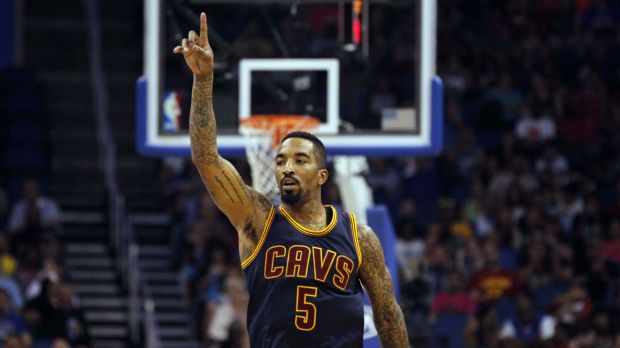 After rising to become a Cleveland favorite in last year’s Finals, Matthew Dellavedova, known by Cavs fans as simply Delly, has an exciting offseason coming up. Last season he received his first contract over a million dollars to return to the Cavs and help fill the void at the point guard position while Kyrie Irving was out recovering from offseason knee surgery. Delly had a strong regular season hitting the three at a high clip of 41% and averaging 7.5 ppg and 4.4 apg. His numbers took a dive in the playoffs, but the heart and energy he brings to every game was still very much there. Given that Mo Williams just recently exercised his player option to return to the Cavs next season and Kyrie is healthy and exploding into the superstar player everyone knew he could be, it begs the question of how much the Cavs want to spend at the point guard position. It also does not help in Delly’s favor that the Cavs just drafted Kay Felder, another point guard. Delly is a restricted free agent however, meaning the Cavs can match any offer he receives from another team. Felder may have been the piece the Cavs needed if Delly were to receive a high offer from a team looking for a strong backup point guard. It will be interesting to see how much money the Cavs will be willing to spend to keep the much-needed tenacity and the chemistry Delly brings off the bench.

An offseason pickup that turned out to be a godsend for the Cavs was the signing of Richard Jefferson. From his no-quit attitude during the NBA Finals to his love for Snapchat and his sidekick Lil’ Kev, fans and team members value the veteran presence Jefferson has provided off the bench and in the locker room. During the locker room celebration after the game 7 series clinching win, Jefferson announced that he would be retiring. Nevertheless, during the Cavs record breaking parade celebration, Cleveland Cavs fans chanted “one more year” to the 15 year vet, convincing him to resign with the Cavs and help defend the championship. The type of deal for Jefferson is still to be determined, but it is likely to be somewhere around the veteran minimum and the team and the city of Cleveland would welcome him back with open arms.

Timofey Movgov saw the type of turnaround any NBA player would love, going from a struggling Denver Nuggets team to a championship contender for the Cleveland Cavaliers. Under ex-coach David Blatt, Mozgov saw a good amount of playing time and had the starting center position; but when Blatt was removed and coach Lue implemented a faster pace to the overall play of the team, Mozgov’s role was diminished and he eventually fell out of rotation. During the playoff run Mozgov could be seen standing along the bench cheering on his teammates as the Cavs rolled through each round. Now with a brand new championship ring, it would not be very surprising at all to see Mozgov take an offer with a team (like New York) that could promise him more money and more playing time. The Cavs do have bird rights on Mozgov, meaning they can exceed the salary cap to resign him and they just might do that to keep their depth at the center position or possibly package him in a trade later down the line.

When the Cavs finished off the Toronto Raptors and secured their spot in The Finals all the headlines were about LeBron James competing in his sixth straight NBA Finals. A player with the same accomplishment that was not receiving the same recognition was veteran shooting guard James Jones. Jones followed LeBron from Miami to come to Cleveland and continue the chase for more rings. His goal was fulfilled this season giving him three championships for his career. James Jones is 35 and could definitely give retirement some serious thought this offseason. But given his cherished friendship with LeBron and the love the whole team has for him in the locker room, it would not be surprising to see Jones take the veteran minimum and go for a seventh straight NBA Finals appearance and potentially a fourth ring.

Finally, Jordan McRae was a late season pickup for the Cavs. After dealing Jarred Cunningham and Joe Harris to Orlando, the Cavs signed McRae from the D-League. Jordan McRae is a gifted offensive player and proved that to the city when he went for a career high 36 points in an overtime loss to the Detroit Pistons for the last game of the regular season. Depending on what happens with some of the other free agents this offseason, the Cavs could end up resigning McRae for cheap and develop him into a an offensive threat off the bench or use him for a trade at the deadline like GM David Griffin did with Jared Cunningham.

Overall, this was a historic season for the Cleveland Cavaliers that ended with them on top of the NBA as the 2016 NBA World Champions. All of the players and staff members will be taking a much deserved break from basketball to enjoy the summer. With the NBA free agency looming, with it comes the hard choices of who will and will not be returning to the 2016-2017 Cleveland Cavaliers roster. The Cleveland Cavaliers front office will most likely try to keep the core group together knowing they have such strong chemistry and have proved they can overcome extreme adversity to win it all. But no matter what ends up happening during this offseason, the 2015-2016 Cleveland Cavaliers will always be cemented in NBA history as will LeBron James’ legacy. 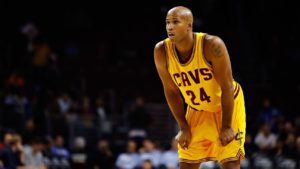