The Evolution of Kyrie Irving 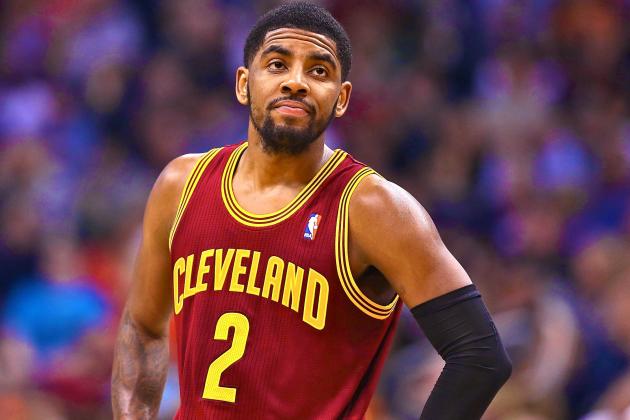 Kyrie Irving has played himself into the conversation of the NBA’s best point guards. There’s no refuting that Irving, after being named the MVP of the All-Star game and FIBA World Cup in the same season, is on the verge of superstardom. So far, that success hasn’t translated exactly as the Cavs had hoped it would during the regular season. Kyrie’s individual scoring and flashy dribbling has shown Cavs fans what he brings to the backcourt, but he hasn’t mastered the facilitative role of an effective ball mover like a true point guard. That doesn’t negate from Kyrie’s talent or value, it just means adding a strong passing game along with leadership will enhance Kyrie’s’ offensive versatility and help him reach the high expectations ahead of him.
In the most recent All-Star game in February, Irving deservedly won the Most Valuable Player award. He finished with 31 points on a fiery 14-17 shooting from the field (3-6 3pt), 5 rebounds, and a whopping 14 assists in leading his East team to victory. This performance wasn’t foreign to Kyrie Irving, who comes up up big in the biggest moments of the biggest game; however, Kyrie’s All-Star performance definitely contrasted his typical Cavalier routine.

Irving mainly played off the ball that game, getting open looks while the attention was on fellow All-Stars including his new teammate, LeBron James. That resulted in an unimaginable 82% field goal percentage. And if he wasn’t getting set up for a shot, he was returning the favor by setting up his teammates for dunks or open jumpers. That resulted in 14 assists and ultimately the MVP title, an award Kyrie brought back to Cleveland with pride

Adversity followed the phenomenal weekend, but Irving made a strong run with his Cavalier teammates and finished just 5 games short of the final playoff spot in the East. Now that may not sound like a big deal, but for a team who hadn’t won more than 24 games the past 3 seasons, tied the NBA’s all time losing streak record at 26, it was the closest they’d come to even thinking about the playoffs. Kyrie made a bad team a lot less bad.

The FIBA World Championship was a whole other experience for Kyrie Irving. He was a guaranteed lock to make Team USA, but with his lack of experience compared to the rest of the guards on the team, his anticipated playing time was limited. Competing with Stephen Curry, Derrick Rose, Klay Thompson, DeMar DeRozan, and James Harden for playing time brought the best out of Irving. He would make the team and although he would pick his spots and play mostly off the ball alongside Harden and Curry, he definitely made his impact on the first couple games that were all lopsided. Yet again, Kyrie used his experience of playing with superstars to get better at supplementing other scorers and playing off the ball.

The Gold Medal game was one of Kyrie’s most impressive outings. The United States ended up facing the Serbian National Team in the final, who defeated France in the round earlier. Serbia started out strong while the U.S. was more casual. Down 12-5 with 6:36 left in the first quarter, Kyrie Irving stepped up his game, scoring his first basket on the ensuing possession and finishing the quarter with 15 points to give Team USA a 35-21 lead. Irving would lead the U.S. to the Gold medal with a 129-92 victory. He finished with 26 points on a super efficient 10/13 from the field, including a perfect 6/6 from 3 point land. Kyrie carried the team when they needed him, and gave his team options with his off-ball movements that spread Serbia’s defense.

Irving is slowly learning when he should be more passive to get his teammates involved and when he should be a more aggressive scorer. Kyrie is able to find this balance after excelling on the court with other superstars, offering him the perfect practice to develop his role on a team with LeBron James and Kevin Loves. Surrounded by plenty of firepower, Kyrie will have the opportunity to grow on a team full of the bests as he strives to be the best at the top of the key. I mean, just look at this guy:

JUST IN: The Transformation Of Cavs From A Lottery Team To A Super Team
Related TopicsAll StarCleveland CavaliersFIBA World CupKyrie IrvingTeam USA