The Cleveland Cavaliers Comeback To Defeat The Charlotte Hornets 91-87 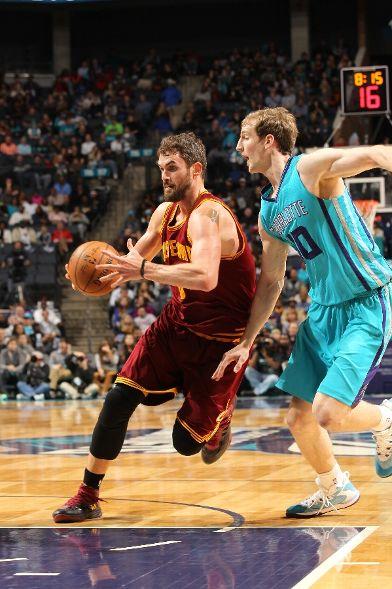 The Cleveland Cavaliers had a horrid finish to 2014 as they lost 3 consecutive games to fall to an underwhelming 18-14 on the year, LeBron James would be lost for at least the following 2 weeks, and Anderson Varejao suffered a season-ending torn Achilles injury. The Cavs have struggled this season without James in the lineup:

They looked to right the ship to start 2015 year with Kevin Love as well as Shawn Marion back in the lineup and did so by defeating the Charlotte Hornets in grind-it-out fashion on Friday night 91-87. James’ being out did not stop the Cavs fans from showing the love for their team on the road tonight, like this guy for example:

LeBron being out didn't stop this guy from going all out pic.twitter.com/6OzwM1EQKf

With Kevin Love back in the lineup, the Cavs rode their star point guard and power forward in the first quarter as Kyrie Irving and Love scored 12 of Cleveland’s first 15 points of the game. Charlotte’s Cody Zeller, who started in place of the injured Al Jefferson, helped his Hornets keep up with the Cavs’ stars and knotted the game at 15 apiece with 3:35 remaining in the first quarter. From that point, Charlotte closed the remaining 3 minutes out with a 9-1 run capped by 5 quick points by P.J. Hairston. Cleveland trailed 16-25 after 1, with Love and Irving each having 6 points.

The Cavaliers started the 2nd quarter on a huge run of 14-3 to take a 30-28 lead with Love, Irving, and Thompson in the game. Unfortunately, all the work the starters put was given right back as the Hornets went on a run of 15-3 for their first double-digit lead of 11 with just 2 minutes left in the half. Everyone was getting involved for the Hornets and the Cavs were getting badly outrebounded and outhustled. Cleveland was determined not to let this game get out of hand, as they forced 2 turnovers and a missed shot while scoring 8 straight to get back within 3 points. Dion Waiters got hot and had 6 of those 8 points. Gary Neal followed up with a 3-pointer to give the Hornets a 46-40 halftime lead.

Cleveland came out as aggressive as anyone could’ve asked for led by Kevin Love, who hit 3 consecutive 3-pointers to start after colliding with Charlotte center Bismack Biyombo and holding his left knee for a while.

Entire team goes out to check on Love, who is finally back up standing and walking slowly. Flexing leg. That's the good news. Not his back

With Love getting hot, the Cavaliers scored 16 points in less than 5 minutes while defending the Hornets well and holding them to just 6 points in that 5-minute span to take a 58-52 lead. Michael Kidd-Gilchrist tried to keep the Hornets in the game with a personal 5 point run, but that couldn’t stop Dion Waiters, who countered with 8 straight points himself in the 3rd. Waiters missed a layup, but Tristan Thompson’s nightly activity around the basket got him the rebound and the dunk to give Cleveland their largest lead of the night at 72-64 going into the 4th quarter. Cleveland outscored Charlotte 32-18 in the 3rd. The Hornets, who are the best in the NBA at protecting the ball, turning the ball over just under 11 times per game, had 5 turnovers in the 3rd quarter alone thanks to increased pressure from the Cavs, namely Irving and Waiters who each had 4 steals at the end of the 3rd. Cavs broadcaster Austin Carr chimed in on his team’s defense in the 3rd.

Cavs defense has come to life, this is the energy they must play with all the time ,especially when they are short handed

The 4th quarter was filled with more back-and-forth action before Cleveland took an 11-point lead with 5:35 remaining. Charlotte used a combined effort and a 10-2 run to get within 86-83 with 1:22 left in the game on a Gerald Henderson scoop layup when Kevin Love was beat off the dribble and Cleveland’s weak-side helpers were late. After Kemba Walker blocked Irving’s shot out of bounds, Cleveland had 4 seconds left on the shot clock and 28.2 on the game clock. Love caught the ball in the corner, dribbled into a post up on Marvin Williams, took a look at the shot clock on the opposite end of the court, and took a 17-foot fade away jumper to give the Cavs an 88-83 lead with just 23 seconds left. The Hornets missed 3 three-pointers in the end and Kyrie Irving sealed the game by making 3 out of 4 free throws to give Cleveland the 91-87 road victory over the Hornets.

Kevin Love came up huge for the Cavaliers in his return from injury, scoring 27 big points and grabbing 5 rebounds while blocking 1 shot. Kyrie Irving had 23 points, 4 rebounds, 3 assists, and 4 steals, but struggled shooting at just 8-27 on the night. Tristan Thompson had a big double-double with 14 points, 14 rebounds, and 3 blocked shots. Dion Waiters had 17 points off the bench with 5 rebounds, 2 assists, and 4 steals. Shawn Marion had 7 points and 10 big rebounds also off the bench in the Cavaliers victory. With James and Varejao out, some of Cleveland’s players were forced to play big minutes tonight.

Tristan Thompson now has 4 straight double-doubles, averaging 15 points and 12.7 rebounds while playing 39.8 minutes over those last 4 games and has done an excellent job filling in for Varejao thus far, which will be needed if the Cavaliers are to get better as the season progresses.

Gerald Henderson scored 14 points for the Hornets with 8 rebounds, and 4 assists. Kemba Walker struggled mightily with 10 points, 2 rebounds, 5 assists, 2 steals, and 2 blocks on just 4-16 from the field. Michael Kidd-Gilchrist had 12 points and 10 rebounds, but also had 5 turnovers. Marvin Williams scored 10 points with 6 rebounds and Gary Neal had 11 points on 5-16 shooting with 3 assists. Cody Zeller had 8 points, 7 rebounds, and blocked 3 shots.

As a team, the Cavaliers shot horribly at just 37.9% from the field including 4-15 from the 3-point line, 46 rebounds, only 16 assists, but had 8 steals, 5 blocks, and just 7 turnovers. The Hornets were just a shot worse from the field, finishing at 36.8% from the field including 6-28 from the 3-point line, 50 rebounds, 20 assists, 5 steals, and 6 blocks but committed twice as many turnovers as the Cavs at 14. This was a grind-it-out type of game with both teams struggling from the field as well as the free throw line inexplicably. With both teams’ top defenders out with injuries (LeBron James, Anderson Varejao for Cleveland; Al Jefferson and Lance Stephenson for Charlotte), this game was expected to finish with both teams easily scoring 100 points.
Cleveland starts 2015 on a positive note and ended their 3-game losing streak to move to 19-14 while Charlotte dropped to a surprising 10-24. They also seemed to have avoided yet another major injury after Kevin Love went down and immediately grabbed his left knee before getting up on his own power and continuing to play. The Cavaliers next game is at home against the 24-10 Dallas Mavericks on Sunday with a 1 PM EST start time.