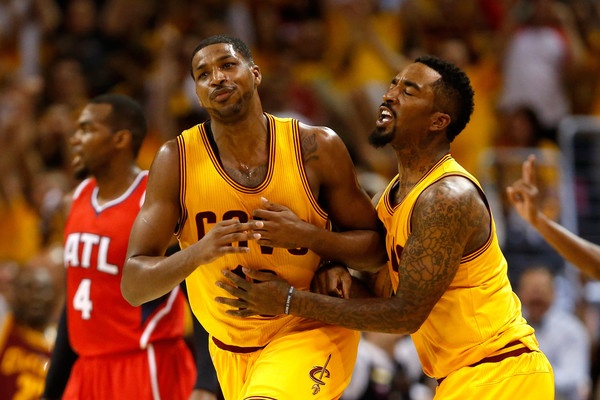 As we progress through the offseason, the Cavaliers have yet to re-sign their backup power forward, Tristan Thompson. Additionally, they have not re-signed their spark plug off the bench in J.R. Smith. Both players were vital in helping the Cavaliers make a run to the NBA Finals this past season and it is imperative that both players return to help Cleveland’s hopes of winning the championship next season.

The question hasn’t been brought up yet, but there is a chance that the Cavs only bring one of the two back. When asking which player is more important, you have to look at the Cavaliers depth as a whole team. Interestingly enough, Smith and Thompson are both really needed at their respective positions. However, Thompson seems to be more important, especially after he stepped up big time in Kevin Love’s absence during the playoffs. There are three main reasons why Thompson is more important to the Cavaliers future than Smith.

The first reason is age. Thompson is younger than Smith thus meaning that providing he never gets a serious injury, he has more years left compared to Smith. And when talking about injury, knock on wood, Thompson hasn’t missed a single game in his NBA career. Thompson played 60 games in the lockout-shortened 2011-12 season and 82 games in every season until now. Thompson is the definition of an iron-man.

The second reason why Thompson is more important is due to the fact that he is one of the better “bigs” in the league. The NBA over the past few years has seen a change in how games are being played and the inclusion of small ball lineups. Due to teams playing small, traditional centers and power forwards that cannot stretch the floor are seeing fewer minutes. Therefore, good big men who can run the floor in the NBA are becoming a rare commodity.

The third and final reason that Thompson is more important to the Cavaliers future is his consistency when he is on the court. As mentioned previously, it is hard for these big men to get minutes so it is essential that while they are on the floor, they take advantage of that time and play consistent minutes. Thompson succeeds in doing that on a nightly basis due to his immediate effect on the game, especially when compared to Smith.

While Thompson is more important to the Cavaliers future, that does not mean that Smith is a nonessential piece to the championship puzzle. The Cavaliers need Smith to provide that spark off the bench. With Smith, his consistency is always a big question mark because one game, he could drop 30 with eight three-pointers and a game winner, and then he could shoot 2/12 the next night while committing a few costly fouls. However, his upside is far greater than his downside, as displayed by all games not including the NBA Finals, which is why the Cavaliers need him as well. He also provides solid defense and depth for the Cavs on the wing.

As the Cavaliers are in talks with both players, it would be better off if we were able to re-sign both and not just one. They play two different positions and they both bolster our bench. Thompson is more important to re-sign, but Smith is needed as well. Losing Smith would mean we would have to go out and find a replacement for him and while there is an abundance of good wing players in the league, there are very few that are currently on the market right now. Thompson provides consistent play, defensively and on the boards, while Smith has Sixth Man of the Year potential like when he won the award with the Knicks back in 2013.