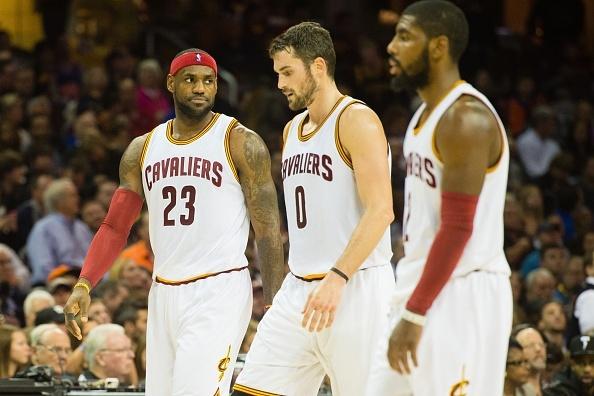 This season has been one for the ages, with some of the best players emerging from teams that we expected to do well, but not great. From the Hawks to the Cavs, here are the NBA’s 10 best trios from the 2014-15 season by their combined PER (Player Efficiency Rating).

We start with number 10:

Maybe we’re doing this team a little injustice by ranking them 10th. After all, they’re at the top of the rankings in the east, and only trail the high-powered Warriors for 1st in the league. However, the Hawks are geared more towards team-centered basketball and their whole is greater than the sum of their parts. Add in fellow all-star Kyle Korver and a Greg Popovich disciple in Mike Budenholzer, and you have yourself a roster defined by their composition and comradery rather than their individual talent.

Click ‘Next’ to see who the ninth best trio in the NBA is! Yet another team-first squad, the Grizzlies are fighting for the second spot in the West, and it’s mainly because of the core of Conley, Gasol and Randolph. Memphis sits at 53-25, and the work ethic that these three bring every day is the reason why every game against the Grizz is a grind-it-out type of game.

Click ‘Next’ to see who the eighth best trio in the NBA is! Last year, Jimmy Butler was just a defender with the occasional offense while Gasol was struggling mightily in L.A. But Butler’s career year and Gasol’s reemergence have the Bulls playing exceptional, even in the midst of Derrick Rose’s unfortunate injury. Rose is now back, and once he returns to form during the playoffs, they’ll look to face the Cavaliers in a possible second round series, something both sides and the fans want to see.

Click ‘Next’ to see who the seventh best trio in the NBA is!

The perennial “Big Three” of the last half-decade has always resided in Miami, back when the King still reigned supreme in South Beach. Chris Bosh and Dwyane Wade, both terrific compliments to LeBron James, now find themselves the stars of their own show. Now, with the acquisition of reigning Most Improved Player of the Year, Goran Dragic, the Heat now bolster another unique trio. It’s a shame that Bosh went down with the blood clot as this team really could’ve made a push for a top 6 seed instead of fightint to just make the playoffs. But next season, take these three and add in former all-star, Luol Deng, as well as standout performer, Hassan Whiteside, and the Heat will have one of the most complete starting lineups in the league.

Click ‘Next’ to see who the sixth best trio in the NBA is! 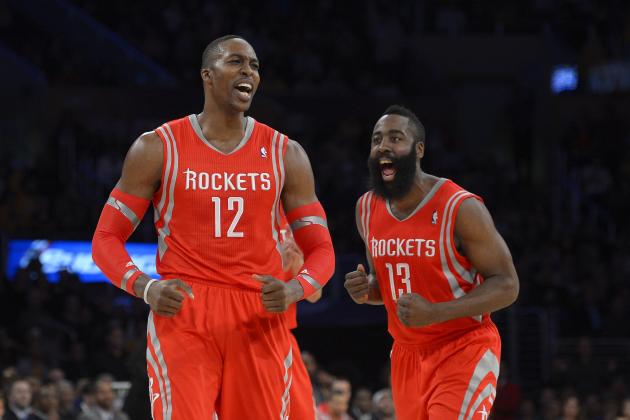 “Dwight (Howard) and I are the cornerstones of the Rockets. The rest of the guys are role players or pieces that complete our team.” – James Harden

With Harden’s words out for the public to dissect, we’re left with deciding who the throw-in for this trio will be. Terrence Jones takes the cake with his stellar play at a relatively young age. The former Kentucky forward is producing at a higher rate than Dwight Howard due to his injury, but he’s been fighting an injury bug of his own this season. We’re guessing this means he can sit with Harden and Howard at their lunch table.

Click ‘Next’ to see who the fifth best trio in the NBA is!

Though Wesley Mathews now finds himself watching his Blazers compete from the sidelines, with a cast around his leg, he formed quite a cohesive unit alongside LaMarcus Aldridge and Damian Lillard. As one of the elite shooters in the league, Mathews was able to spread the floor for Lillard and Aldridge to operate, and provided a deadly kick-out option for the duo. His defense is also being missed, but the Blazers luckily swooped up Arron Afflalo at the trade deadline.

Click ‘Next’ to see who the fourth best trio in the NBA is!

Paul, Griffin, and Jordan are the heart of this team. With the exception of Matt Barnes, these three are the emotional leaders, the offensive go-to guys, and the defensive juggernauts everyone expected them to be. Don’t let the lack of depth on the Clipper bench fool you, for these three are having one of the best statistical seasons in their history, and it has them in the middle of playoff positioning that could be as good as the two seed or as bad as the sixth seed.

Click ‘Next’ to see who the third best trio in the NBA is!

The Splash Brothers make for an intriguing and dynamic duo, one capable of wreaking havoc with quick and explosive offense. Looking further down the Warriors roster, we have an all-around great supporting cast, and even a great coach in Steve Kerr. However, Draymond Green stands out on the roster due to the impact he has on the floor, especially on the defensive end. The incredible heart that he has playing the power forward position is THE reason why the Warriors are so good defensively. Green’s looking at a huge payday this offseason.

Click ‘Next’ to see who the second best trio in the NBA is!

If Love was able to produce in Cleveland the way he did in Minnesota, the Cavaliers would hold claims to the best trio in the league. But the Cavs don’t need Love to produce as his old “Timberwolves” level anymore. They just need him to be aggressive inside and spot up whenever Irving and James drive to the cup. He’s still producing as much as Chris Bosh did when he was playing alongside LeBron James in Miami, and the dropoff in production was certainly expected, so the trio of Irving, James, and Love are the second best in the NBA this season.

Click ‘Next’ to see who the best trio in the NBA is!

Russell Westbrook’s other-worldly performances in the wake of Kevin Durant’s absence has catapulted him into best-player-in-the-league discussions. It could be that these stats are slightly skewed considering perhaps Westbrook wouldn’t be producing at such a high level if Durant were on the floor with him. Regardless though, no one can deny Westbrook his talent, and to pair with last season’s MVP would make for the best duo in the league. And to add shot-blocking anchor, Serge Ibaka, to the fold? Or even the emerging-out-of-nowhere Enes Kanter? Watch out for this trio next year, when Durant recovers from his bone graft surgery.