Since the Cleveland Cavaliers signed Koby Altman as the team’s new general manager in June 2017, the high-ranking executive has green-lighted several big moves that have had a significant effect on the franchise moving forward. After all, losing LeBron James in 2018 served as a tremendous blow for the organization, and Altman was left with little choice but to make the necessary moves to try and usher in the new era for the Cavs.

Life for Cleveland has been difficult post-LeBron, to say the least, and Altman and his front-office dealings have not always been met with critical acclaim by the Cavs faithful. Then again, it’s necessary to cut the man some slack, considering all the limitations his team is currently in.

At the end of the day, it’s extremely difficult, if not impossible to replace one of the greatest players of all time after he walks away from your team for nothing.

Be that as it may, credit needs to be given where it is due. Since James’ second departure in 2018, Altman needs to receive ample praise for pulling off arguably the coup of the 2020 February trade deadline. This comes in the form of the blockbuster Andre Drummond trade, which is arguably the best move the Cavs have made post-LeBron.

The deal went like this: the Cavs sent John Henson, Brandon Knight, and a 2023 second-round pick to the Detroit Pistons in exchange for Drummond. The 6-foot-10 big man may have his limitations, but it’s hard to deny Cleveland were able to snag him for an absolute bargain.

For starters, the players the Cavs parted with were not exactly key pieces on their side. Henson, whom they acquired a year earlier via a trade with the Milwaukee Bucks, put up just 5.0 points and 3.9 boards in 14.2 minutes off the bench.

Meanwhile, Knight arrived in Cleveland a couple of months following Henson as part of a three-team deal with the Houston Rockets and the Sacramento Kings. Similar to Henson, Knight played a minor role for the Cavs, averaging 4.9 points and 1.9 assists in just 15.1 minutes per game.

As for the 2023 second-round pick, that too is not extremely important for Cleveland. Aside from the fact that the Cavs have a couple more picks in that draft, this particular pick actually comes with a clause which stipulates that it may not convey depending on Cleveland’s (and the Golden State Warriors’) position in the draft. Again, another aspect that goes in favor of the Cavs.

What they got in return is a 26-year-old, two-time All-Star who is easily one of the best rebounders in the game today. He does have a few shortcomings, but he still has centerpiece material written all over him. He has been in the league for eight years now (but is still in his mid-20’s), and his veteran presence is a great match for the young prospects on the team, namely, Collin Sexton, Darius Garland and Kevin Porter Jr.

The only downside of the deal is Drummond’s contract. Aside from the fact that he is owed $55.7 million between this current and the following season — money that the Cavs can actually afford — Drummond actually has a player option on his deal for next season. This means that if he so chooses, he could very well walk away from the Cavs in the offseason, leaving them with nothing to show for.

However, this is where it gets interesting. The season hiatus may have worked in the favor of the Cavs. The uncertainty brought about by the pandemic makes it a more viable option for Drummond to stick with the Cleveland for the 2020-21 campaign, as opposed to entering the free agent market this coming offseason.

This puts Cleveland in an excellent position to see how what kind of chemistry the team will have with Drummond on board next season.

The big question now is whether or not Cleveland should offer Drummond an extension. There have been rumors that both parties are currently looking into the prospect of signing a long-term extension, which would mean that the Cavs would be committing themselves to Drummond for the long run. We have a more in-depth analysis of the pro’s and con’s of this rumored extension here, and we explained why this might not be the best idea for the Cavs.

The important thing to note here is that Cleveland currently has options. Credit to Altman and the front office for pulling off the Andre Drummond deal in February, and whatever they do over the next few months should determine just how good (or bad) this entire Drummond transaction has been/will be for the franchise. 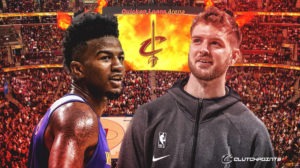