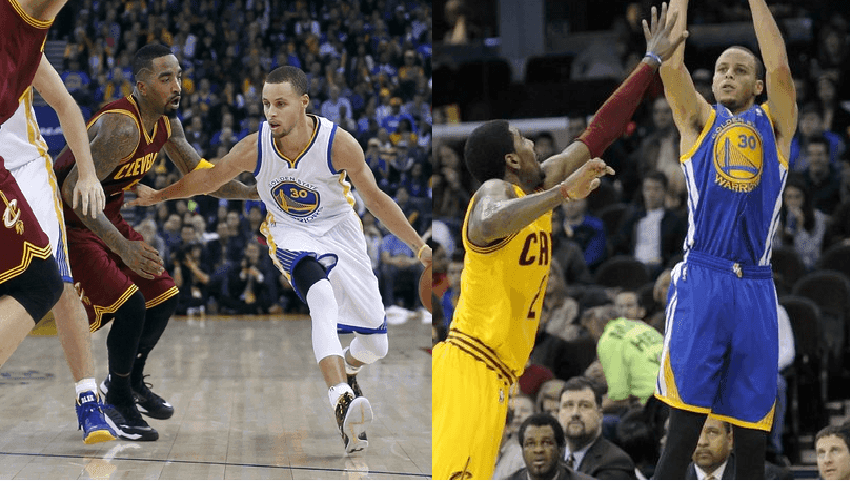 Stephen Curry, by almost all accounts, is an unsolvable problem for the Cleveland Cavaliers. NBA legends have called him the best shooter ever, the dominant western conference has struggled to contain him, and he is the MVP of the league on a historically successful Golden State Warriors team. He both handles the ball and sprints off screens on almost every possession, so the Cavs defense will need to be prepared. Here are our five best options for containing Steph Curry.

JR Smith’s play on defense has not been talked about enough this year. He has tendencies to ball watch on defense, but he has accepted the challenge of shutting down his man on several occasions. JR on Curry is not the match up that we want for long stretches late in games, but if he switches on to him with the shot clock running down, it won’t be as much of a drop off as you might think. He is long and athletic like Shumpert, and capable of playing great defense in short stretches. Kyrie and his ailing knee are the biggest question for the Cavs heading into the Finals. If he is healthy, he will be matched up on Curry for stretches during each game. Kyrie has, at times, shown a real improvement to his commitment on the defensive end. He is also a proud player, so the opportunity to go head-to-head with the league’s best point guard will bring the best out of him, as long as he is healthy enough to play his best. The NBA’s newest villain (which is a complete joke) may very well have another big impact on a playoff series when nobody expected him to. Delly, although he doesn’t have his quickness or skill, is just as willing to take on the opponent’s best player. He is also the only Cavs player who will instinctively pick up Curry full court, forcing him to work a little bit harder. He can’t get caught up fighting through screens like he did against Atlanta, though, because Curry will make you pay if he is given any daylight. LeBron has proven before that he can be the shutdown defender that his team needs. He won’t likely be switched on to Curry until late in close games, but his willingness to put that responsibility on his shoulders is a big part of his development as a leader. He has, in the past, locked up Derrick Rose, Tony Parker and Rajon Rondo. Curry may be his next victim. Iman Shumpert is the one Cleveland Cavalier who actively seeks opportunities to guard the opposing team’s best player. He is long and athletic enough to make things difficult for Curry, but will need to be cautious of his typical physicality because Curry is adept at drawing fouls. Shump has shown himself to be capable of defending perimeter players off the dribble and chasing them off of screens. Each of these skills will be needed to contain the league MVP.