The 10 Toughest Games Of The Cavs’ Season

Though being labeled as a heavy favorite, the Cleveland Cavaliers’ road to the promised land will not be a walk in the park. Superstars have realigned their locations and perennial contenders retooled to further boost their already powerhouse lineups. These teams are poised to give Cleveland a good workout which will only serve the team well in the long run. The Cavaliers’ weakness will be exposed by these games but these will also be golden opportunities for the team to improve. On that note, Cavs Nation has handpicked the Wine and Gold’s ten toughest contests in the regular season.

The Cavs open the season against Eastern Conference rival Chicago, and will be without Kyrie Irving. All teams should be in good health in the beginning of the season, and for the injury-plagued Bulls this should be an advantage. New head coach Fred Hoiberg will get an early opportunity to show his stuff against LeBron James and the Cavs, so it will be a very competitive contest.

Click “Next” to see the Cavs’ ninth toughest game of the season! 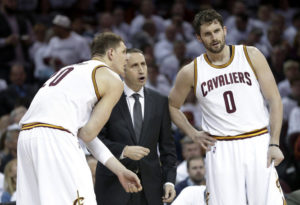 JUST IN: Who Will Be Left Out Of The Cavs’ Big Man Rotation?