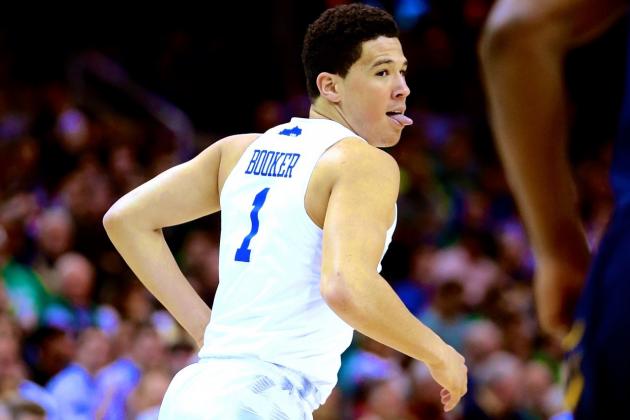 A new breed of players are about to make their official arrival to the league of grown men when their name gets called in the 2015 NBA Draft. With the talent level that this year’s class offers, teams are now on their feet as they burn numerous hours scrutinizing every potential pick’s strengths and weaknesses to see how they fit their grand scheme of things. The draft has been known to have its bag of surprises with busts and breakout stars that are awaiting to be unraveled. With that in mind, Cavs Nation brings to you the who’s who of the 2015 draft class. These are the 10 soon-to-be greenhorns who have the biggest shot at stardom.

Devin Booker brings with him good size for a shooting guard and even though he may be thin at this stage, his built is very much workable. He scored 10.0 points per game on 41.1% shooting from distance and 47% from the field while playing 21.5 minutes for a stacked University of Kentucky squad. The special talent is already there as Booker has NBA range and projects to have no problem in transitioning his skills to the pros. He’s not an elite athlete but good enough to be able to defend at a respectable level. He could very well be another Klay Thompson in the making and this has to get teams excited.

Click “Next” to see the ninth best draft pick who will become an NBA star! JUST IN: LeBron James Not Re-Recruiting Kevin Love This Summer