LeBron James and the Cleveland Cavaliers’ historic accomplishment is so epic that many has found it as a source of inspiration, or even a one-liner just to break the ice.

Recently, Ted Cruz made headlines for his decision to stand firm with regards to his position on presidential candidate Donald Trump. Much to the dismay of his party mates, the senator from Texas was booed off the stage during the Republican convention held in Cleveland.

But before the hostile reception, he managed to get the crowd off their feet by referring to LeBron James, as quoted by Des Bieler of The Washington Post.

“Heidi and I are so honored to join you here in Cleveland, where LeBron James just led an incredible comeback victory. And I am convinced America is going to come back, too.”

Here’s the actual video of Ted Cruz during the said instance.

LeBron James led a powerful comeback, and I am convinced America is going to come back too – @tedcruz #RNCinCLE pic.twitter.com/rn75CbM6rR

Nice play there, Senator Cruz. That works all the time. 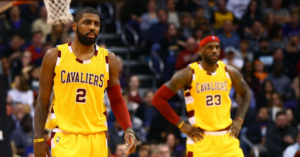 JUST IN: Are The Top Two Threats To Cleveland In Clear View Already?
Related TopicsCavaliersLeBron James