The Cleveland Cavaliers defeat the Philadelphia 76ers 86-77 in their third game to remain undefeated in summer league play. The Cavs and 76ers both started off poor offensively, with neither team getting in any type of shooting rhythm in the first quarter.

The Cavs came out on fire in the second quarter with a 7-0 run to start the quarter and finished with a 15-4 run to extend their lead 48-29 heading into halftime. From there, the Cavs never lost the lead but allowed the 76ers to back into the game cutting their 21 point lead to four with 5:34 remaining in the fourth quarter. Also, the Cavs committed a game high 23 turnovers which contributed to a 76ers comeback.

Andrew Wiggins struggled today offensively, but continues to show flashes of why he was the number one pick in this year’s draft. He finished the game with 10 points, shooting 4-8 from the field. The highlight play of the day for Wiggins came in the middle of the second quarter. He spun through two defenders which led to a 2-handed baseline dunk and got the crowd on its feet. Although he didn’t make a huge impact offensively, he made his presence felt on defense. He finished the game with 3 steals and 2 blocks with one being against the 76ers center Nerlens Noel.

Anthony Bennett continues his impressive start in summer league play with another strong performance, finishing the game with 14 points and 4 rebounds. He ran the floor, showed great athleticism and motor, that wasn’t seen last year. On one transition play that led to a dunk, he was running the floor step-for-step with Wiggins. That type of raw athleticism wasn’t seen last year and had people around the league questioning what the Cavs organization originally saw in him. Now, he  is slowly putting it all together and is looking to have a bounce back season from his disappointing rookie campaign.

{adinserter 2} Matthew Dellavedova continues to run the floor well offensively and play pesky defense from the point guard position. Sure, LeBron James is a superior floor general and Kyrie Irving is a future star at that position, but the Cavs still need depth at point guard. With the expectations of the Cavs completely turning 180 with the signing of LeBron, they may look to add a veteran point guard through free agency to lead their second unit. However, Dellavedova is making a strong case on why the Cavs should be looking at him, not free agency, to fill the void of Irving’s backup. He finished the game with 19 points, shooting 6-9 from the field.

The Cavaliers will look to go 4-0 in summer league on Wednesday. Their opponent has yet to be determined. 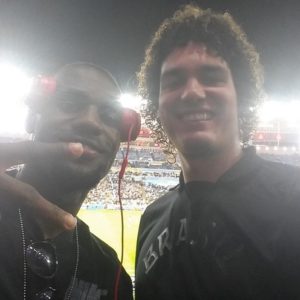 JUST IN: LeBron James In Brazil For The World Cup Final
Related Topics76ersCavaliersClevelandExclusiveLeagueNBAPhiladelphiaSummer