The same question asked a week ago in a same, but opposite context after the Cavaliers became the third team in NBA history to even the NBA Finals after starting down 3-1. The Cavs have turned the table in just a matter of days, keeping Cleveland’s championship hopes alive in a variety of ways. Undaunted jump shots, communicating defense and aggressive help on the glass. They’ve played through a hostile home crowd and flagrant-friendly forward to earn momentum, confidence and… criticism?

RELATED: MUST-SEE: Ayesha Curry Goes Off Again, And Gets Roasted

His clarification might elude the NBA pulling a $25,000 trigger, but his clarifications can’t be used to the benefit of the doubt, let alone MVP argument of Curry. Switching Curry into an uncomfortable defensive position every other play, the Cavs put the league-leader in predicaments all night. He’s had a -16 overall impact over the last two games.

RELATED: You Won’t Believe Who Stephen Curry Threw His Mouthpiece At

Curry fouled out, James dropped another 41, but as Mark Jackson says, “Cleveland has been winning with their defense.” 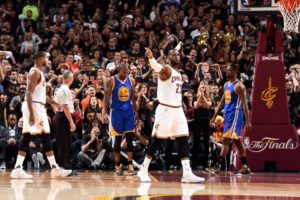