Stephen Curry has found plenty of heat directed at himself after a video surfaced over the weekend where he’s seen doing the LeBron James Challenge on the wedding of his former teammate Harrison Barnes.

The two-time league MVP has issued a response to the situation by telling Marcus Thompson of The Athletic that it was an in-the-moment action only to elicit humor. He also downplayed the presence of Kyrie Irving in the crowd that found his act as hilarious.

“One thousand percent,” Curry said. “That was just a casualty of the moment because me and him were hanging out all night. Then that song came on and I was having a good time. Obviously, that’s a separate side story to their relationship, but neither one of us was trying to clown him.”

Curry also stated that he watches the video at least twice a day because it was his favorite and that he even does it in his own home since the video was posted by James on Instagram. It should be noted that the two have a strong bond of respect for each other that has developed over the last few seasons.

What has made this an even more intriguing situation is that Kyrie Irving was present, laughing at Curry while he was imitating his teammate. It has also created a greater sense that Irving wants to be traded from the Cleveland Cavaliers and further clouded his future with the team.

Although this may have been a light-hearted moment for Curry, it has put him in the centerfold of the drama unfolding in Cleveland. 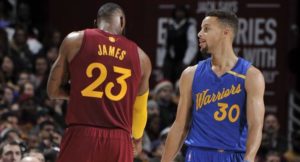