Should the Cavs Bring Back J.R. Smith? 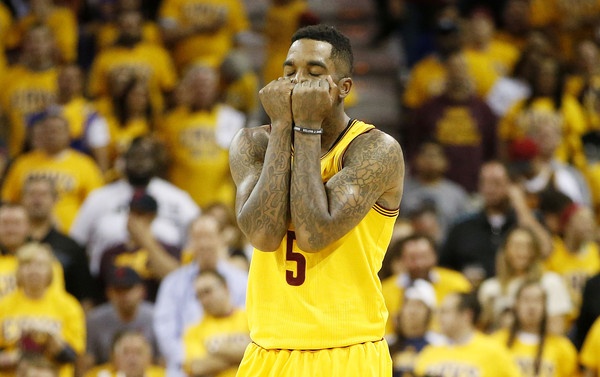 J.R. Smith, the former Cavalier guard, declined his player option for the 2015-16 season and is now an unrestricted free agent. If he did opt in though, he would have been paid nearly $6.4 million. The fact that Smith chose not to pick up the option indicates that he is looking for a more profitable and longer deal. That’s not to say, however, that he doesn’t intend it to be with the Cavs.

Midway through the season, the Cavs acquired J.R. Smith from the New York Knicks in a three-team deal that also brought in Iman Shumpert. Smith was able to improve his stock while playing alongside Lebron and was an instant weapon for the Cavs. During the season, Smith averaged 12.7 points and 1.4 steals per game, while also hitting just under 40% of his shots from behind the arc. Interestingly, much of his success was credited to the poor nightlife in Cleveland.

Coming into the playoffs, Smith was very confident as he made claims that no one could beat Cavs in a seven-game series. However, two major injuries put Cavs just a pair of games short of a historic championship. Nonetheless, the magic of J.R. Smith was evident during the Cavs’ Eastern Conference playoff run. He made everything from pull-up jumpers to fade away shots and step backs. He was hitting contested shots as if they were wide open jumpers. While he spent much of his time in the spotlight during the East playoffs, he wasn’t the same in the Finals. 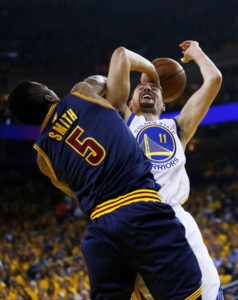 From shooting low percentages to committing horrible fouls, Smith displayed everything negative he is capable of doing in the Finals. His field goal percentage dropped from 42.5% in regular season to 31.2% in finals. His percentages from beyond the arc also fell by around 10% and ended up below 30%. Further to this, J.R. was absent in crunch time in Game 2 and even committed three horrible and unwanted fouls which almost handed them their second consecutive loss. After the game, J.R. admitted that it was his fault and he was praying for the Cavs to win this one somehow. However, this wasn’t expected of him.

While saying this, you cannot judge him or any player based on a single series, even though it was the biggest series of the year. Smith has shown interest in re-signing with Cavs, but should Cleveland be willing to go over the $6.4 million mark and offer him a multi-year deal?

Cleveland’s management has done their work so far this offseason. They have already negotiated with their core players to re-sign, but still need to set things straight with Tristan Thompson. Although Thompson and the Cavs haven’t worked out a deal yet, it’s expected in a matter of days5.

It was reported that LeBron James will not make a move until the Cavs get Tristan Thompson to sign. At this stage, J.R. Smith is really at the bottom of the ladder in terms of priority for the management. When David Griffin was asked whether or not the Cavs will re-sign J.R. Smith, he said, “if it’s the right situation for us.”

Smith has shown what he is capable of and among that is being a solid player off the bench. Bringing back Smith does not impact the squad negatively and he is a great compliment to LeBron James who often finds his open teammates. If Smith can give the team at least the same kind of effort that we saw from him during the regular season and East playoffs, there’s no doubt that he would be an important piece next year.

While saying all these, the more pressing question at the moment is not about the Cavs’ ability to bring Smith back. Rather, it’s about how the Cavaliers can become better even without him. If they offer Tristan Thompson big bucks, which they are likely to do with all the pressure from LeBron James, and then re-sign James to a max contract, they will be further exceeding the cap especially if they re-sign the mercurial Smith. Surely, there are better options available but can Cleveland sign any of them? They certainly do not have the available cap room to go chasing after players. If J.R. Smith can make a settlement with the Cavs, it would be a great deal for both sides. Good thing Dan Gilbert has thrown away the concept of a salary cap about a year ago during a certain homecoming.