Should David Blatt Be Back As Head Coach For 2015-16 Season? 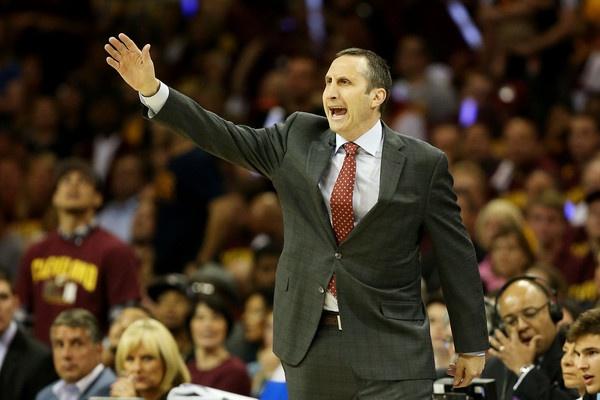 After the Cavaliers lost in the NBA Finals, many have started to question the job security of NBA rookie head coach, David Blatt. You could say that Steve Kerr who headed the Golden State Warriors in his first season as well, out-coached him during the Finals. In Game 4, Kerr changed his lineup to play small ball and the Warriors didn’t lose again. The Warriors went on to win the next three games and the championship. Blatt tried to counter this by going small as well and it did not work as well. Of course, the Warriors were a much deeper team than the Cavaliers so fatigue played a role as well.

After the hiring of Blatt, many speculated if he would be a good fit for Cleveland. He had plenty of coaching experience from overseas, but people did not know how well he would fare in the NBA. He was hired before the return of LeBron. Once LeBron signed with the Cavaliers, some wondered if Blatt was capable of coaching a player of LeBron’s stature. He did not fare too well to start the season off. The Cavaliers posted a 19-20 record and some wondered at the time if he was on the verge of getting fired. However, the Cavaliers flipped the script after such an atrocious start to the season.

They posted an outstanding record of 34-9 the rest of the way. In addition, they had one of the best records in the NBA after the All-Star break. It was obvious that things started to click and that Blatt was pushing the right buttons to get this team where it needed to be heading into the playoffs. The Cavaliers finished with the second best record in the Eastern Conference at 53-29. They swept the Boston Celtics in the first round, but lost Kevin Love to injury in the process. Analysts counted the Cavaliers out and expected them to lose to the Chicago Bulls in the next round. They proved the world wrong and won that series in six games. They advanced to play the top seed in the conference, Atlanta Hawks, in the Eastern Conference Finals. The Cavaliers proceeded to sweep the Hawks and move on to the NBA Finals. One would think, not bad for a first year head coach who had no previous coaching experience in the NBA of any kind.

Cavs GM David Griffin talked about the job Blatt did during the Cavs exit interviews:

“LeBron himself said he thinks Coach has done a hell of a job,” Griffin said last Thursday. “So if you want to use his actual words, that’s what the man said.”

As mentioned previously, the Cavaliers lost to the Warriors in six games. The Cavaliers also lost Kyrie Irving in Game 1 of the Finals. Remarkably, they still managed to push the series to six games even when many counted them out again. Although Kerr out-coached him, Blatt should not have to worry about losing his job. He faced adversity all year long and fell just two wins shy of bringing a championship to Cleveland. There is no way you should lose your job after making it to the Finals. However, the bar will now be raised and his expectations on the upcoming season will be for him to get the Cavaliers back to the Finals, provided that they have a healthy roster. In addition, he most certainly cannot start the year off 19-20 again as well. Improvements to be expected are for them to win more games next year, get the first seed in the conference, and ultimately win the NBA championship.