Minnesota Timberwolves point guard Ricky Rubio has played in the NBA for six seasons already, and he’s definitely seen a lot of LeBron James on the court personally during his time in the big league.

The Cleveland Cavaliers‘ record-setting win in Game 4 of the NBA Finals that ended the Golden State Warriors‘ bid for an undefeated postseason run to the NBA title certainly impressed Rubio, which led to the Spaniard taking to his Twitter account with this to say:

If Lebron can pull this finals and get the trophy we can put him at MJ level… just my opinion.

Unfortunately, the Cavs fell short of making the unprecedented series comeback a reality, ultimately losing to the Warriors in Game 5.

Still, Rubio had a great point. If James and the Cavs had indeed clawed out of their 3-0 hole in the Finals — a feat that no NBA team has ever accomplished in the entire history of the playoffs — every basketball fan would be hard-pressed to really start considering the King as a virtual equal to His Airness.

After all, James surely gave it his all in his attempt to stage the greatest comeback the likes nobody has ever seen before; so much so that he ended up being the only player in NBA history to average a triple-double in the Finals.

James’ 3-5 record in the Finals surely puts a dent into his chances of rivaling Jordan’s legacy, but he also has a ton of gas left in his career’s tank despite his age of 32. With seven consecutive trips to the Finals (and counting), chances are we’ll see a lot more of LeBron in the final stage of the postseason in the years ahead to try and do something else magical and hopefully sway the masses’ opinions in his favor in the on-going debate between him and Michael Jordan as the GOAT of all GOATs. 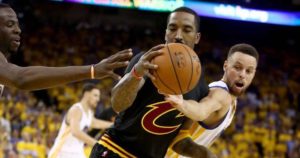