The Cleveland Cavaliers recently signed Richard Jefferson in hopes of adding depth to their bench and to provide minutes relief for LeBron James. Jefferson is 35 years of age and is entering his 15th season in the NBA. However, his road to the Cavaliers was not an easy one as he has played for six different NBA teams all over the map but his journey began in college at the University of Arizona.

While there are many players who jumped to the NBA straight from high school, Jefferson attended the University of Arizona from 1998-2001 before he took his talents to the NBA. He played 84 career games for the Wildcats and averaged a respectable 11.2 points per game during that span. He finished his career with the Wildcats by leading them to the 2001 National Championship game where they ultimately lost to Duke by the final score of 82-72.

Click “Next” to see the next career destination of Richard Jefferson! 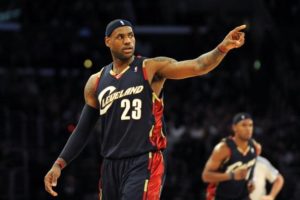 JUST IN: 10 Things We Learned About LeBron James Through his Q&A