Kyrie Irving created a lot of buzz over the weekend with his flat Earth comments on an episode of Road Trippin’ with Richard Jefferson and Channing Frye. It seems Irving was just trying point out how the media latches on to some stories, while more important world issues are often overlooked.

I don’t know if you could even call it news,” Irving said during an interview before the All-Star game. “There’s so many real things going on. Like things that are going on that change the shape and the way of our lives. I think sometimes it get skewed because of who we are and the basketball world.”

“I know the science. I know everything possible. The fact that this can actually be real news, and you know, people actually ask me, ‘Its a social phenomenon, what do you think about it? Are you going to try to protect your image?’”

As a result of Irving’s flat Earth remarks, all forms of media were sent into a frenzy. However, his teammates, including LeBron James, have been coming to his defense.

lebron interrupts his interview to ask kyrie if the earth is flat pic.twitter.com/Z7rjtZH52p

Jefferson, always good for a laugh, recently wore a unique t-shirt that has “Flat world champions” written across the front in honor of Irving’s theory.

Whatever shape Irving believes the Earth is, there is no doubt, he’ll always be loved by Cavaliers fans. Those who are interested in acquiring a “flat world champions” shirt can head over to Fresh Brewed Tees. 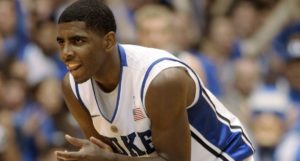