Richard Jefferson says pressure is on for the Warriors The Cleveland Cavaliers blowing out the Golden State Warriors last Friday night was the best thing that could have happened to the wine and gold, as their historic performance has certainly elevated many player’s morale. It seems the Cavs have truly embraced the high stakes of the one-and-done situation they put themselves in by shooting the lights out at the Q, and having some time to rest and recollect on their first win can only be filled to the brim with positive attitudes on the team.

Richard Jefferson, the stoic 36-year old small forward, went as far as saying the Cavs are in a situation with less pressure than the Warriors, at least according to Chris Haynes.

Richard Jefferson said the Warriors are the ones who were a 73-9 team and added Kevin Durant: "The pressure is on them."

Jefferson does have a point in his sentiments to the Warriors. The 2016 Cavaliers managed to pull off a league-first 3-1 comeback on a historically talented team that rocked the regular season winning record.

Now, the Cavs have a different narrative: magically come back from a 3-0 deficit on the 2017 Warriors, a team that added Kevin Durant that now rocks the playoff winning record. I bet that sounds too insane to be true…

When you think about it, we could just be witnessing history in the making just like 2016. Lock in Cavs Nation. Lock in. 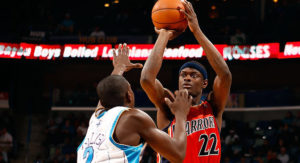 JUST IN: Anthony Morrow believes that the Cavaliers beat the Warriors out of luck
Related TopicsCavaliersRichard JeffersonWarriors