The Cleveland Cavaliers surrendered their championship crown on Monday night as they fell to the Golden State Warriors inside Oracle Arena in Game 5. With the Cavs showing early promise, they couldn’t create a big enough gap in the first period as the Warriors’ offensive onslaught was inevitably coming.

As the seconds ticked away, both franchises embraced each other, but it was heartbreak for the Wine and Gold who left it all out but fell short to simply a superior team. The Cavs threw everything at the Warriors, but will look back to the collapse down the stretch of Game 3 at home as the one that got away when trying to turn the series around.

One of the players that can hold their head up for the Cavaliers was evergreen veteran Richard Jefferson, who was an instrumental part of the success the Cavs had when going small. Jefferson, crazily enough also had the near impossible task of guarding Warriors’ scoring machine Kevin Durant.

Jefferson took the challenge on Durant in the final possession of their Christmas Day match-up inside Quicken Loans Arena where “RJ” turned back the clock with some thunderous dunks and ensured Durant didn’t get a shot off in the final play to preserve the Cavs’ win.

Turns out, according to Jason Lloyd of The Athletic, Jefferson begged head coach Tyronn Lue for a chance to guard Durant in this year’s Finals series for months.

The NBA world was anticipating the mouthwatering duel between Durant and Cavs’ main man LeBron James, but in truth, it was always an unfair and unrealistic scenario seeing both guarding each other for every minute, especially given the load James had to carry in comparison to Durant. In fact, it was always going to differ as both the Warriors and Cavs switch almost everything defensively. Due to this, Jefferson put his hand up as the guy to try and slow down Durant for the majority of the time with James then interchanging when he could provided that he had enough energy after expending colossal amounts on both ends.

It was a turning point for the Cavs, who set this all up after they quickly went 2-0 down in the series. Jefferson should be proud of his efforts, and applauded for taking the challenge at nearly 37-years-old.

He continues to be a reliable contributor off the bench for the Wine and Gold, in an area in which they lacked at times this season. The competitive fire still burns inside Jefferson, and he, as well as the Cavs, will look to take back what they feel is theirs next season. 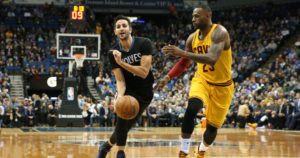