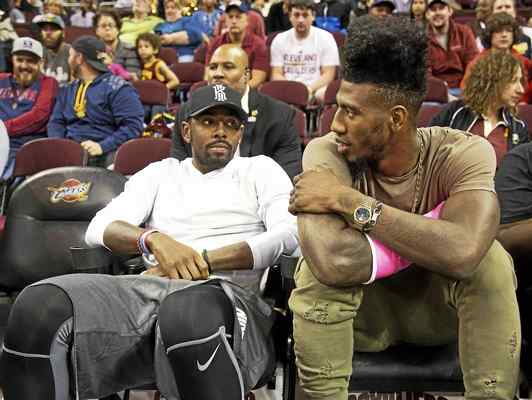 Tonight, the Eastern Conference-leading Cavaliers kick of a four-game road trip in Los Angeles with a matchup against the Clippers at 8:30 p.m. EST inside The Staples Center.

Just when they seemed to be getting healthy, the Cavs, who have dealt with injuries for the entire season, were hit with another setback. In the second half of Thursday’s home game against the Utah Jazz, Kyrie Irving and Iman Shumpert sustained injuries and were not able to return to play.

Irving, who scored 21 points, four assists, and four rebounds in Thursday’s 91-83 victory, said his left knee had been sore for a couple of days. With 8:31 showing on the game clock, Irving asked for a substitution and made his way to the bench. According to most reports, the crafty ball-handler is fine, however, his status for tonight’s game is still listed as questionable.

“I’m going to see my masseuse, get some treatment in the morning, and take this four-hour ride to LA that we’re all dreading,” Irving said after Thursday’s game.

“We’ll just see in the next few days,” Irving continued. “I’m hoping that I don’t have to miss any days, but if it really comes down to that and the bigger picture is way more important than a few days, then that’s what it’s going to be. But as of right now, I’m fine.”

Shumpert, who injured his shoulder in a dunk attempt over Jazz big man Rudy Gobert in the third quarter of Thursday’s game, has officially been listed as “day-to-day,” according to Cavs Head Coach Tyronn Lue. The savvy defenseman was not available to the media after Thursday’s win, but J.R. Smith, Shumpert’s long-time friend and teammate, felt relieved when he learned the injury wasn’t serious.

“I’ve seen Shump go out time and time again and never really know what the case may be, but it was a great feeling when I walked back in and he said it was nothing serious,” Smith said.

Smith, who knows the sting of the injury bug well, was playing in just his fifth game back in the rotation since undergoing thumb surgery in February. Smith commented on the Cavaliers’ team motto.

Smith himself has played the role of next man up with Kyle Korver missing his fifth straight game this past week. Hopefully, with just 15 games remaining the regular season, Cleveland can find full strength heading into the playoffs.