At the beginning of last season, Joe Harris was being seriously considered to start at shooting guard for the Cleveland Cavaliers over veteran forward Shawn Marion and streaky shooter Dion Waiters. Fast forward to today, and the Cavs have two additional starting caliber shooting guards on the roster: J.R. Smith and Iman Shumpert. The additions of Shumpert and Smith last year, along with the addition of Jared Cunningham this year, have made Joe Harris expendable. The Cavs have arguably the best backcourt depth in the league, boasting a combination of stars, role players, veterans, and younger guys. While it seems that the Cavs like Harris enough to have him stick around, he hasn’t had solid minutes through his season and a half on the team.

Jared Cunningham was the 15th and final player to make the Cavs roster at the beginning of this season, but his play has elevated himself into a role player spot, averaging 13.3 minutes per game off the bench. Cunningham may be out of the rotation once Irving and Shump return to full health. While he is not necessarily a better player than Harris, Cunningham definitely has an advantage in terms of experience and athleticism. Cunningham has shown the Cavs that he can play team ball while also shooting at a high level. Additionally, Cunningham’s contract is non-guaranteed until Jan. 8th, meaning that the Cavs could release him before then without taking a hit to their salary cap. Harris, on the other hand, has a fully guaranteed minimum contract for this season to the tune of $845,059, and a non-guaranteed $980,439 for the 2016-2017 NBA season. This makes Harris the odd one out, as dumping Harris’s salary would lower the Cavs’ luxury tax bill by $3,356,647, as reported by Dan Feldman of NBC Sports.

Harris is really the only move that the Cavs can make prior to the trade deadline, which is set for March 1st, 2016. With a luxury tax bill of $65 million for this season, the Cavs can’t afford to take on a another contract. Additionally, there is no reason to mess with the current roster. The Cavs have solid starters and backups at every position, and when at full health, the team can confidently compete for a title against the other elite teams in the league. This leaves the Cavs with only one choice: to trade Harris.

In exchange for Harris, the Cavs are rumored to be requesting a 2nd round pick. Many teams can offer the Cavs this, but most notably the Philadelphia 76ers, Los Angeles Lakers, and New Orleans Pelicans, among others. The Cavs currently don’t have a first round pick in the 2016 NBA Draft, although they do have the LA Clippers’ second round choice. Getting a draft pick in return for Harris is not the biggest appeal for trading Harris, though. It is simply something that the Cavs can get in return for a player whom they value. Harris hasn’t shown much on the court yet, due to the lack of playing time on a championship caliber team. But it seems that there is some interest around the league for a 3-and-D player like the 6’6 Harris, especially for teams that are rebuilding.

The biggest appeal for trading away Harris is so that the Cavs can obtain an extra roster spot. Cunningham will most likely stay on the roster for the season. Additionally, it is highly doubtful that the Cavs will trade or release any other players on the roster, simply because they do not want to make too many changes. By trading Harris away without getting any players back, the Cavs have an extra roster spot to use on a veteran after the trade deadline. It is very common for veteran players to get traded due to their contracts, and then promptly released afterwards. After being released, the player(s) are able to choose which team to join based on the teams that show interest. A few players who signed after the trade deadline after being waived last season: Amar’e Stoudemire, Kendrick Perkins, Josh Smith, and Nate Robinson, among others. The Cavs probably want that last spot to remain open in case a notable name comes up following the trade deadline. They picked up Kendrick Perkins with their last roster spot following the trade deadline last season, and he played some valuable minutes off the bench and also was a strong veteran voice in the locker room to supplement LeBron James, James Jones, Mike Miller, and Shawn Marion.

While Harris has a lot of upside, his potential is being wasted by sitting on the bench of a championship caliber team in which he will not get significant playing time. The Cavs don’t need him, which makes him expendable. Additionally, it might be beneficial for Harris to get a fresh start on a team that will actually play him. Whatever the Cavs can get in return for him, the better. It’ll be sad to see Harris go, but his departure will open up the possibility of bringing someone in that will make a bigger impact on the Cavs championship hopes this season. 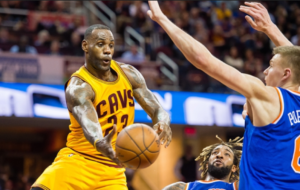