If you didn’t know by now, LeBron James loves his Cavaliers. He loves his Cleveland, and he can’t wait to be back representing the setting of his storied career. James’ tales will always center around his work ethic. The $90 million-dollar Nike Prodigy at 17, capturing all the hype and elusive promises. In yet another season of preparation, James plans on entering his 13th season after another busy summer. He demands this from his teammates as well.

Per Cleveland.com’s Joe Vardon, James will host his Cavaliers in California for late September. A majority of the team is expected to attend, as such gatherings make all the difference for chemistry. LeBron James was ecstatic about these opportunities when he announced his eighth-figure contract signing via UNINTERRUPTED.

” Cavs support staff can also attend the workouts and are making plans to be in Los Angeles in September, another source said. Lue is bringing back all but one of his assistants from last year’s team. Many, if not all, could be hanging around in L.A. next month. The Cavs’ first practice of actual training camp is Sept. 27.”
-Joe Vardon

There’s still no explanation for how LeBron plans his workouts other than convenience. Last year, he had it in Miami to reconnect and relive a familiar runner-up summer in 2011. The workout before that summer was in Independence, Ohio by the mansion he came home to. With a variety of Cavaliers – Richard Jefferson, Kevin Love to name a few – spending their summer in L.A., this seems like another step James is taking to motivate his teammates. 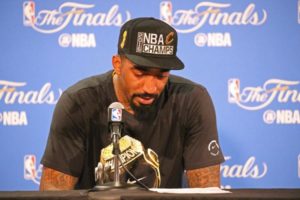