REPORT: LeBron James informs Cavs he will re-sign with them, but he’s vacationing right now

James hadn’t notified the Cavs when he planned to re-sign with them, which was never a cause for concern, but he was expected to sign his contract already. Last year, James agreed to his new deal on July 9th, and signed as soon as he was able to.

At the moment, however, James is enjoying his vacation traveling with his family with no plans as to when he’s going to sign his new deal. All both parties know is that LeBron is going to stay a Cavalier, but he’s focusing on enjoying his summer with his kids and wife.

Windhorst also adds that James has a couple of options when signing.

Under league rules, James has several contract choices. He can sign for up to $27.5 million next season on a one-year deal — as he has done the past two summers — or sign a multiyear deal that could make him the league’s highest-paid player at $30.8 million for next season.

The latter is deal is much less likely as everyone is expecting James to sign another two year deal with an option to opt out after the first year and strike a better deal next season.

James shares the same agent as current Cavs free agent J.R. Smith, but his discussions with the Cavs aren’t expected to affect his decision to return. Don’t expect a deal to be done very soon, but don’t be a bit surprised when it does. 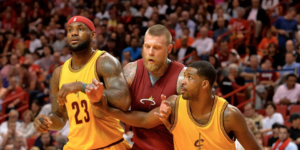