This time over the past couple of years is the time that LeBron James enters his “Zero Dark 23” mode, where he shuts down all social media and focuses on the playoffs and NBA basketball. This year, however, LeBron James could be changing it up.

“I don’t know,” James said Friday. “In the past I haven’t done it until like the night before the game anyways. So, we don’t play until Sunday, so I still have a day, two days actually to figure out what I’m going to do. But it doesn’t matter, if I’m on social media, if I’m off social media I’m going to be locked in anyway, so I’m not worried about that.”

The part that all fans would be worried about is James’ focus, but the past month or so has shown that James has absolutely locked himself in. He’s even won three consecutive Player of the Month awards for February, March, and April.

His numbers post-All Star break are also very telling of the scary uptick in his play. After the midseason spectacle, James has averaged 25.8 points, 8.0 rebounds, and 7.2 assists per game for the Cavaliers.

It is that time of the year for the best player in the world, and everyone is bound to become witnesses, once again, to a classic all-around stroke of excellence. 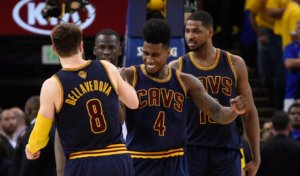