On Friday night, Iman Shumpert made his long awaited season debut for the Cavs against the Orlando Magic. Before the game, David Blatt said that he didn’t know how long he would play Shumpert, but wanted to give him enough time to get a rhythm and be effective on the floor.

Shumpert did just that, playing 25 minutes and finishing with 14 points on 5-7 from the field to go along with three rebounds. J.R. Smith missed the game with an illness and Jared Cunningham got the start in his place. One has to think that Shumpert will be retaking the starting shooting guard spot sooner rather than later.

The final piece of the Cavs puzzle is about to be put into play.

Chris Haynes from Cleveland.com reported that Kyrie Irving can’t wait to get back on the court, and has been urging the Cavs to let him play in the Cavs upcoming road game against the Boston Celtics.

This week Irving has been desperately trying to persuade the organization to activate him, cleveland.com was told. The Cavaliers have been urging him to remain patient, as they want to be cautious with the three-time All-Star.

Irving is traveling and participating in full practices, waiting to be cleared. It’s only a matter of time and could be as soon as Tuesday in Boston. He sat at his locker stall after the trouncing on Friday just marveling at his teammates. This group could be special.

Irving has been recovering from knee surgery during last year’s NBA Finals, and has been practicing in full for over a week. Once he returns, Cleveland could be at full strength if Smith can make his return as well, and then the real test for the Cavs will begin.

“It’s great to have bodies,” LeBron James said. “Coach is going to have a great opportunity to do what he wants to do with the lineups. We’re just missing one more piece and once we get that, we can really start to see what we’re capable of doing.”

Felt good to be next to you brother now the countdown for my Hardy brother begins! @KyrieIrving up next!!! 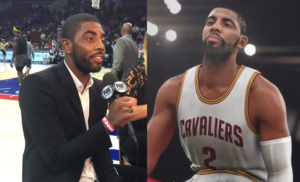