REPORT: Joe Johnson Has Passed On Signing With The Cleveland Cavaliers The Cleveland Cavaliers were reportedly in the running to sign Joe Johnson, who was recently waived by the Brooklyn Nets. However, reports out of ESPN and The Vertical state that Johnson will pass on signing with the Cavs in favor of the Miami Heat.

Free agent Joe Johnson has committed to a deal with the Miami Heat after he clears waivers, league sources tell The Vertical.

The seven-time veteran is reportedly feeling like Miami will give him the best opportunity to play meaningful minutes as well as compete for a championship. The Heat are currently in fourth place at 32-25, sitting 9.5 games behind the 41-15 Cleveland Cavaliers and only 3.5 games ahead of the ninth place Detroit Pistons. With Chris Bosh possibly out for the season with blood clots, Miami loses 19.1 points, 7.4 rebounds, and 2.4 assists and Johnson likely sees an opportunity to step in and score for the Heat. Johnson can sign his contract as early as tomorrow, so nothing is official until the ink hits the paper.

Let’s be honest though, the Heat will have a hard time progressing in the postseason without their all-star power forward Bosh, so Johnson likely isn’t committed to trying to win a championship.

There are still some options available to the Cavs in free agency however, so stay tuned to see who the Cavs can try and sign. 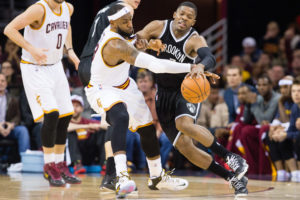