On Cavs Media Day, General Manager David Griffin opened with statements regarding now-retired Mo Williams and unrestricted J.R. Smith. Griffin said that the Cavs had put together a “competitive and aggressive” offer for J.R. Smith and hoped a deal would get done soon. Here’s Griffin’s full quote:

“J.R. Smith is not here today,” Griffin said. “As we’ve stated and coach has previously stated, we think very highly of J.R. We love him as a member of our team. As a member of our locker room, he was essential to our success. And for that reason we’ve made an incredibly competitive and aggressive offer to re-sign him. We hope that gets done in very short order.”

At the same time, we’ve been a team that has really become accustomed to a ‘next man up’ mentality and we expect this will be no different, not at all something that’s going to be used as an excuse here in any way, shape or form. But we truly believe J.R. feels the same way about us and, as I said, we hope this is done in very short order.”

According to Joe Vardon of Cleveland.com, J.R. Smith has officially declined the offer and remains an unrestricted free agent.

The Cavs’ offer to Smith was somewhere between $10 million and $11 million annually, and Smith rejected it.

Smith is believed to be in search of a three-year deal around $12-15 million annually. Smith is represented by Rich Paul of Klutch Sports, who is a good friend of and represents LeBron James. His production has been consistent in his year-and-a-half with the Cavaliers, averaging 12.5 points, 3.1 rebounds, 2.0 assists, 1.2 steals and 2.7 three-pointers per game.

One thing is certain: the Cavs need J.R. Smith back and Smith needs the Cavs back. Hopefully, a deal gets done soon. 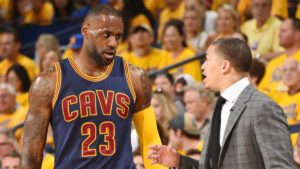