It’s been two and a half months (81 days to be exact) that the Cleveland Cavaliers have been unable to come together on a contract agreement with free agent shooting guard J.R. Smith. The sharpshooter whose career changed when he arrived in Cleveland is still expected to sign with the Cavs, but this contract holdout could go well into training camp, the preseason, and quite possibly the regular season.

With training camp starting next week, the Cavs players are getting together for team workouts this week in Santa Barbara, California. According to Brian Windhorst of ESPN, J.R. Smith will not be in attendance.

Shooting guard J.R. Smith will not attend the Cleveland Cavaliers’ minicamp this week in California as he and the team remain at an impasse in contract talks, sources told ESPN.com.

Cavs players and coaches are gathering for workouts for several days this week in Santa Barbara ahead of the start of training camp next week. The session is meant to create camaraderie ahead of the season.

Windhorst adds that Smith is still focused on making a return to the defending NBA Champions for the 2016-17 title defense. When that title defense will begin for Smith is another story. This isn’t unfamiliar territory to the Cavs, however, as they’ve had players hold out well into the preseason before agreeing on a deal.

Smith is focused on returning to the Cavs — and the team wants him back — but Smith likely won’t hesitate to miss part of training camp to see if his leverage changes. Other teams currently have cap space, and events in the preseason can change the situation. Last season, the Cavs were at an impasse with Paul and free agent Tristan Thompson that saw Thompson miss all of the preseason before coming to terms.

Last season, Tristan Thompson and the Cavs agreed to a deal just days before the start of the regular season, but the Cavs were still able to win an NBA Championship thanks in large part to the incredible chemistry and camaraderie among the guys in the locker room. This contract holdout won’t affect that team chemistry, but it will mean that Tyronn Lue will not have a key member of his roster to work with when the Cavs training camp beings on September 27th.

Hopefully, this holdout doesn’t go into training camp or the preseason like it did with Thompson last year. 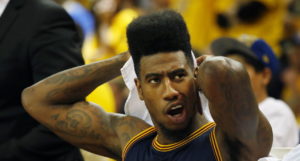