During the first quarter of Monday night’s matchup against the Toronto Raptors, Cleveland Cavaliers starting shooting guard J.R. Smith left the game with a left knee injury after floating a shot up and into the basket. Smith immediately collapsed to the floor, and after the Cavs called timeout, Smith took a couple minutes to get up and off the floor and walk to the locker room under his own power.

After the game, Fox Sports Ohio’s Allie Clifton and Sam Amico reported that X-rays on Smith’s left knee were negative, and that, while his Cavs teammates travel to New York to take on the Knicks, he would return to Cleveland for further evaluation on the knee.

J.R. Smith will return to Cleveland for further evaluation and examination at The Cleveland Clinic. X-rays tonight were negative. #Cavs

White dealing with a sore knee over the past couple of days, Smith has his shooting percentages take huge dips, as he’s made just seven of his last 40 attempts from the field. On the season now, Smith is shooting just 31.1% from the field and 32.7% from downtown.

Here’s the play where Smith injured his knee.

Stay tuned for the latest on J.R. Smith’s knee injury. 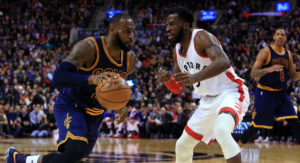