Report: Heat to prevent Chris Bosh from joining Cavs or another championship contender 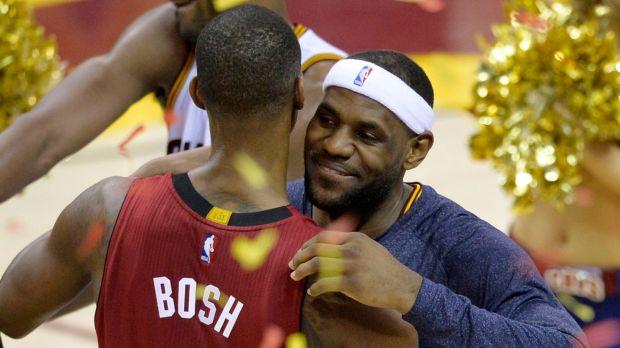 The Miami Heat have not decided what they want to do with Chris Bosh still sidelines as he’s recovering from blood clots. President of Basketball Operations Pat Riley has said that Bosh’s career with the Heat is over, but the team hasn’t waived him yet.

There are many possible reasons, but it looks like the Heat will wait until March 1st to waive Chris Bosh. This turns out to be extremely significant for Bosh and all franchises interested in his services, as he won’t be able to join a title contender.

With the Heat holding onto Bosh, they will wait for the trade deadline to pass before saying goodbye to the 6″11′ power forward. In doing so, it will eliminate any chance Bosh has of joining and helping a team compete for a championship (if he’s healthy). By waiting until after March 1st, Bosh is then unable to play for any team participating in the playoffs.

Unfortunately for Bosh, Miami holds all the cards in this situation unless the NBPA gets involved. The Heat can apply for salary cap relief from Bosh’s contract which still has three years and $76 million left. They can only do this a year after his last game for the franchise, which would be February 9, 2017. By doing so, Miami will save over $25 million in their salary in which Bosh currently occupies.

In addition, the NBA cap rules state that if he plays 25 games for any team this or next year, Miami would still be left with the burden of his contract and the luxury tax that comes with it. Despite this, it seems Pat Riley and the Heat are willing to take this chance, even though it is more than likely a team will eventually take a chance on Chris even for a veteran’s minimum. The Heat are trying to avoid this situation, and by holding out on Bosh, it will more than likely free up their cap space to try and lure big name free agents this summer like Blake Griffin, Chris Paul, Kevin Durant and Steph Curry next offseason, who are all expected to test the market.

Chris Bosh is a fighter, and regardless of his health struggle with blood clots, he is hell-bent on getting back on the floor. James Jones has recently thrown his support behind his former teammates and expects Bosh to find a way to return.

“Chris will play again,” Jones said. “I’ve always said there’s something about that group in Miami. Every single guy down there, in a unique fashion, had overbearing, overwhelming desire to succeed. We did some special things down there namely because those guys (Wade and Bosh) willed their way to it.

It is pretty clear that Bosh is willing to do absolutely anything to suit up again, and is already drawing interest from other franchises and players wanting to share a locker room with the thirty-two year old. Deandre Jordan was straightforward when asked about the Bosh situation:

“I think he should come to the Clippers.”
When pressed, DJ reiterated as much with a “hell yeah,” before adding, “I’d come off the bench,” when asked how that would work.”

It seems as though Bosh has the support of his peers which only adds fuel to his fire to return. With two roster spots still up for grabs, there were murmurs of a reunion with old pals LeBron James and James Jones in Cleveland, but the Heat have now made that a near impossible scenario.

Bosh could have really helped the Cavs, but he is now stuck in a waiting game with the league and his former suitors.

Only time will tell where the two-time champion ends up, and if his health will ever allow him to do so.