Cleveland’s search for a true backup point guard continues, and with it so too does the rumor mill.

According to Joe Vardon of Cleveland.com, the Cavs are keeping an eye on one of the most dramatic situations in the league this season, Chicago’s Rajon Rondo conundrum.

With no real foreseeable futures outside of his continued benching, the former All-Star Point Guard is apparently seeking either a buyout or trade so as to once again play on the court. According to Vardon, the Cavs “are watching this development.”

LeBron James has stated that Cleveland’s biggest issue coming into this season was lack of depth at the point.

“That was obvious from day one, first day of training camp,” James said. “We don’t have a reliable, veteran backup point guard.”

With this in mind, rumblings of any point guard additions should be taken with at least some consideration.

It should be noted that for Cleveland, a Rondo acquisition may not be the best move for several reasons. First and foremost, Rondo’s benching has seemingly stemmed from two sources:

– his inconsistent (and often even detrimental) play as of late, Rondo averages the worst plus/minus of any regular minutes player on the Chicago Bulls this season.

– an attitude issue Rondo has been known for since his entrance into the league. 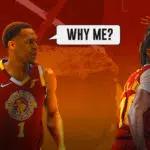 Rondo has similarly struggled playing for the Sacramento Kings last year, and the Dallas Mavericks the year before. Howard Beck recently mentioned how Sacramento moved heaven and earth in an attempt to sign the point guard, yet a year after his contract, made no effort to resign the fading star. Even if Rondo is bought out by Chicago’s front office, there are no promises that the Rondo Cleveland signs won’t be the same player we’ve seen over the past three years.

Additionally, Rondo’s fit on the Cleveland squad is questionable at best. Cleveland’s need for a wing defender may have drawn them to Rondo if he was playing at the same level as his Celtics’ days, though regression has come on both sides of the floor, and his defensive skillset is notably lackluster. A born playmaker, one chief complaint revolving around Rondo’s game has always been a tunnel vision. Without the ball in his hands, Rondo offers little outside of a fifth body on the floor on the offense. Even when running the point, the score first mentality is only broken in changes for an additional assist on the stat sheet. Ty Lue’s pass first centric coaching would at minimum see some resistance from the vet, if not an absolute breakdown during Rondo’s run of the show.

Cleveland attempts the second most three-point shots in the NBA per game, following only the Houston Rockets. Rondo’s lack of a three ball hurts there as well, limiting the play options Cleveland could run in their second unit. Speaking of second unit, Rondo’s ego poses a threat on its own. Being put behind another point guard is somewhere no Former All-Star at the end of their prime wishes to be, and frustration alone could prove detrimental to Cleveland’s season. For all of these reasons and more, it should be taken into heavy consideration that Cleveland is observing the situation, and is in no way actively seeking to make the trade. It is a General Manager’s job to consider all options, and based on Vardon’s report, it can be assumed this is just another potential situation GM David Griffin is keeping an eye on. Financially speaking, a Rondo-to-Cavs deal could also be financially problematic.